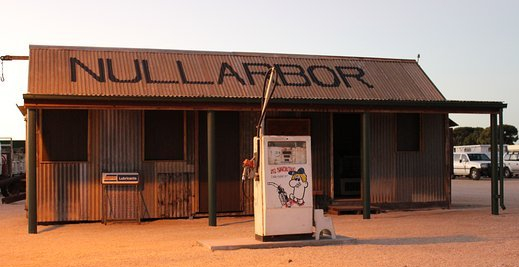 I was under the impression of the Nullarbor being this very dry desert and quite barren but its a very different scenery.    Nullarbor means “no trees” in Latin but in reality the Nullarbor is dotted with green trees, mulga scrub, vegetation and wildlife.   Along the Nullarbor is the longest straight road being 146.6 km – ’90 mile straight’ and there is also the world’s longest golf course “Nullarbor Links” (1365 kilometres actually) with a hole at each town and roadhouse along the way.

After leaving Point Lowly, we stopped at Cowell for lunch and then continued down to Port Lincoln Tourist Park which was a lovely park right on the water.   Here we met up with Daniel and Stacey and their kids, Summer and Harlem.   They were very excited to see Mitchell again!!!   On Friday we took a drive around the town and the marina.     We stopped at the foreshore for the kids to have a play and have some ice cream.

On the foreshore there was a life sized statue of the three time Melbourne Cup winner Makybe Diva.    The owner, Tony Santic lives in Port Lincoln.    The life sized statue was made by Port Lincoln artist Ken Martin.   He took 9 months and worked seven days a week to create the statue, using around 5,000 kgs of plasticine on a steel frame which was then bronzed. 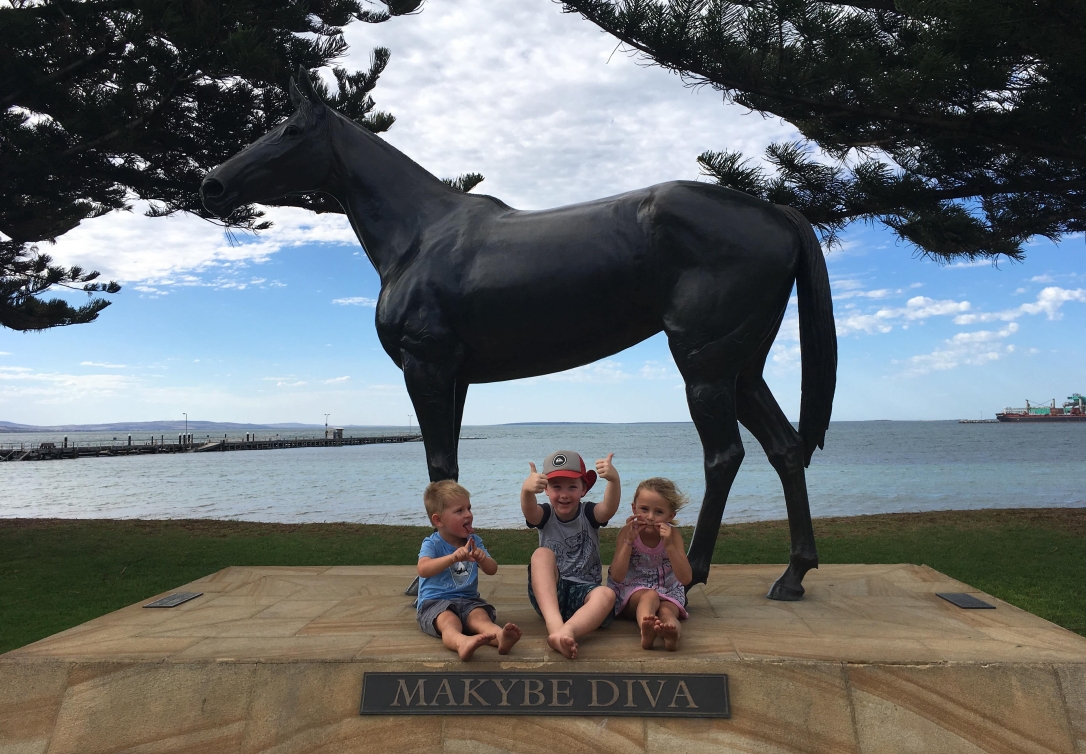 The next day we packed up and continued up Flinders Highway to Streaky Bay.     Along the way we stopped at Coffin Bay and Elliston where Andrew and Mitchell had a fish on the jetty, no luck in catching anything plus we lost Mitchell’s fishing rod!!!!

We checked into Discovery Parks Streaky Bay Foreshore Tourist Park which is a lovely spot along the water.   It was absolutely packed and we were lucky to get in, there were only a couple of sites left!!!!      We were up early the next day to do some 4WD exploring around the area and along the coastline.    We drove to  Whistling Rocks, the Blowholes, Hallys Beach and Cape Bauer. 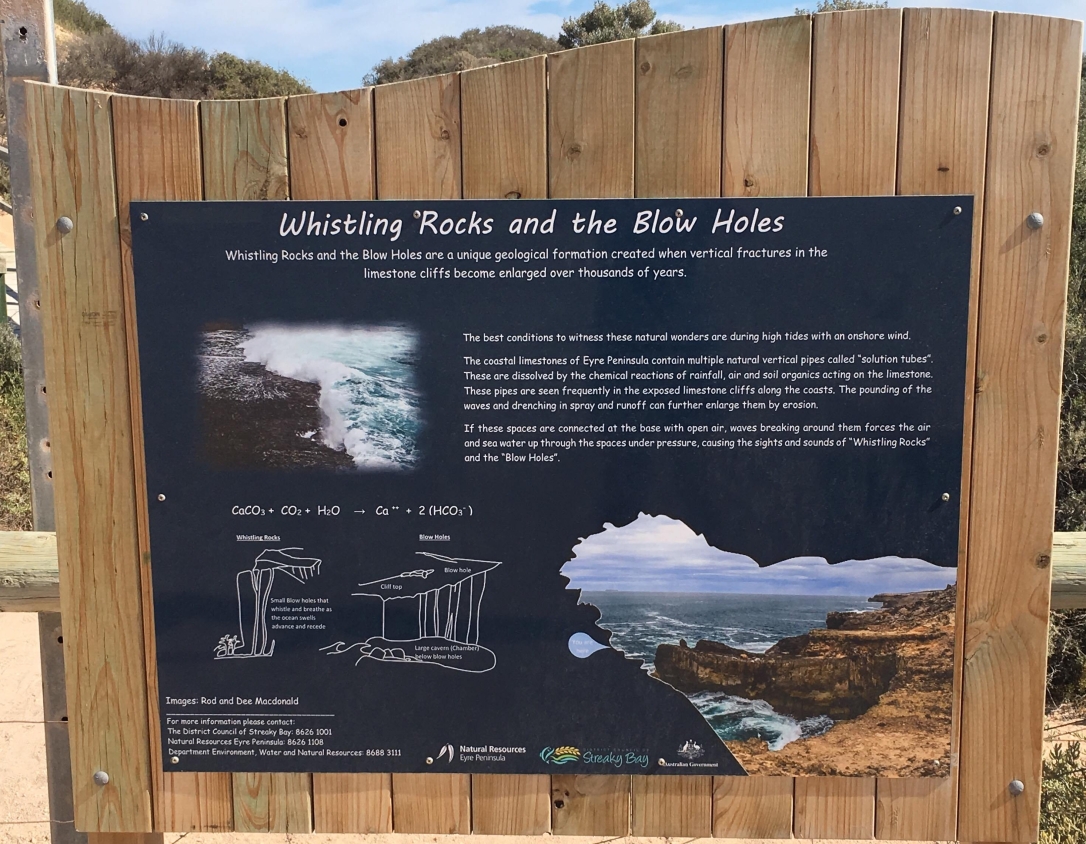 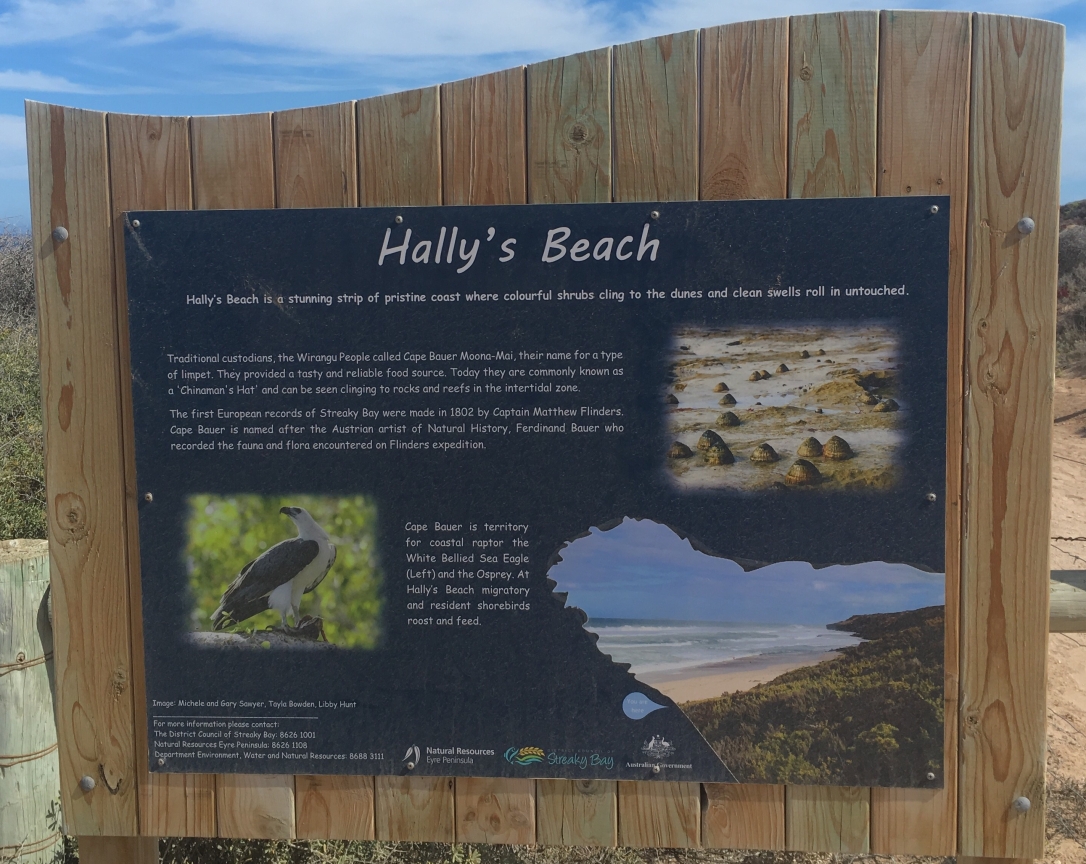 On Monday we packed up again and continued our drive on the Eyre Highway to Ceduna where we checked into the Big 4 Tourist Park for a couple of nights.    Not really much to see and do here.    Andrew went down to the jetty to try his luck at fishing again, we did some shopping and the kids had a play in the park on the foreshore before it started to rain so we headed back to the caravan park.

On Wednesday we left Ceduna and travelled to our next stop.   We turned off the highway and drove around 20kms on a dirt road down to Fowlers Bay.     We checked into Fowlers Bay Caravan Park for a couple of nights.    This was a small dusty park across from the Bay and it had a kids playground next door which was great.     We set up and that  afternoon we had our own two up game for Anzac Day.   We had many drinks and I don’t think we ended up coming out winners but it was alot of fun.    The next day we went 4WDriving along the coastline and all around the sand dunes!!! Woo Hoo!!   We really loved this area.

We tried some sand boarding down the dunes but as it had a rained a few days earlier the sand was still a bit damp so we couldn’t slide down very well but it was still fun having a go!!! 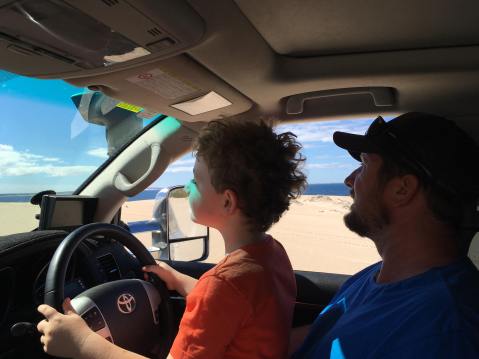 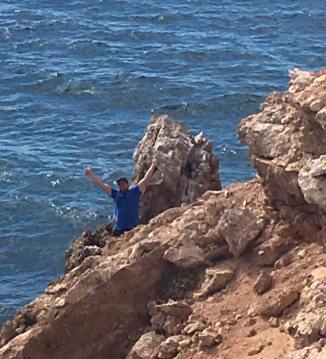 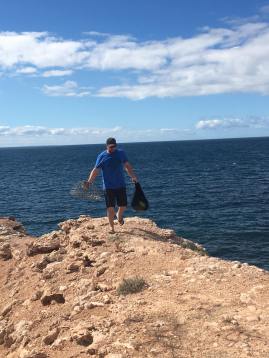 We packed up on Friday and continued our drive across the Nullarbor where we did an overnight stay at the Nullarbor Roadhouse.    It was another very dry and dusty park which is to be expected out here!!!   And lots of flies!!!! 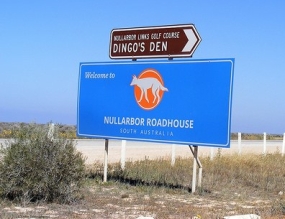 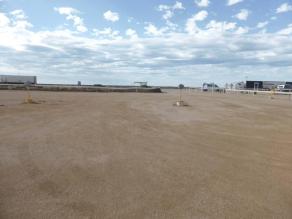 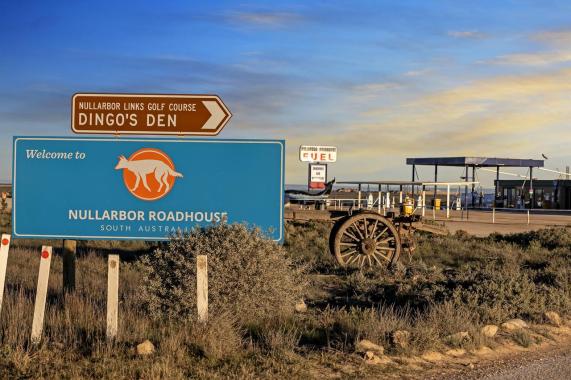 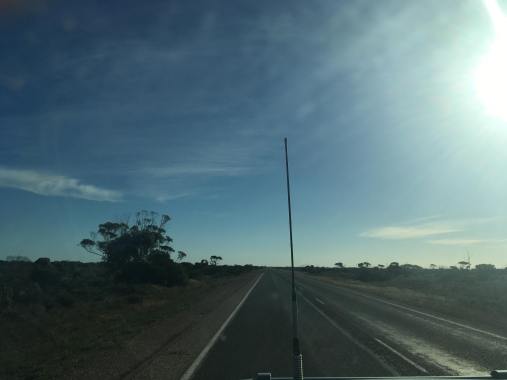 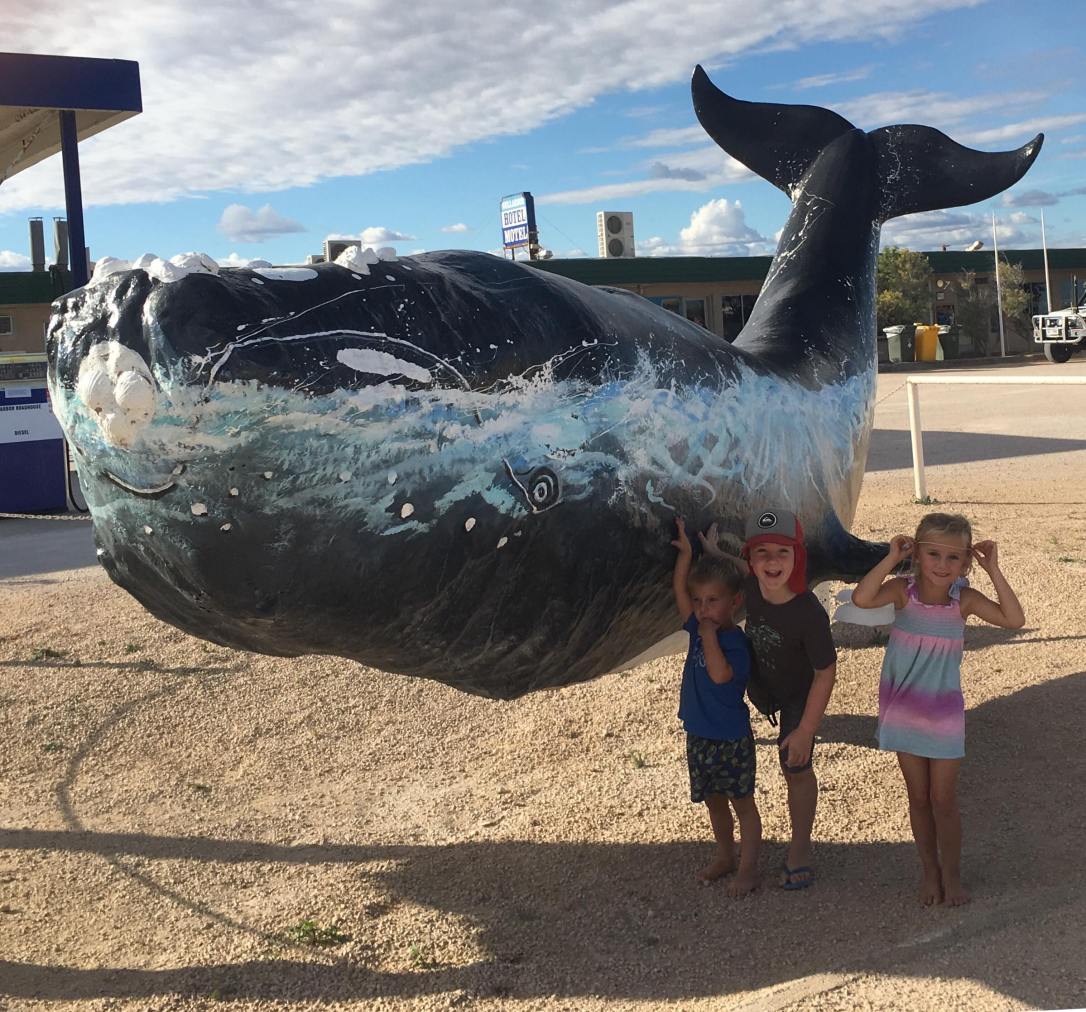 On Saturday morning we woke up to an overcast day.  We packed up and continued along the Highway and stopped at the Bunda Cliffs and took some photos and drone shots of this beautiful rugged coastline.     This area was part of the Great Australia Bight Marine Park. 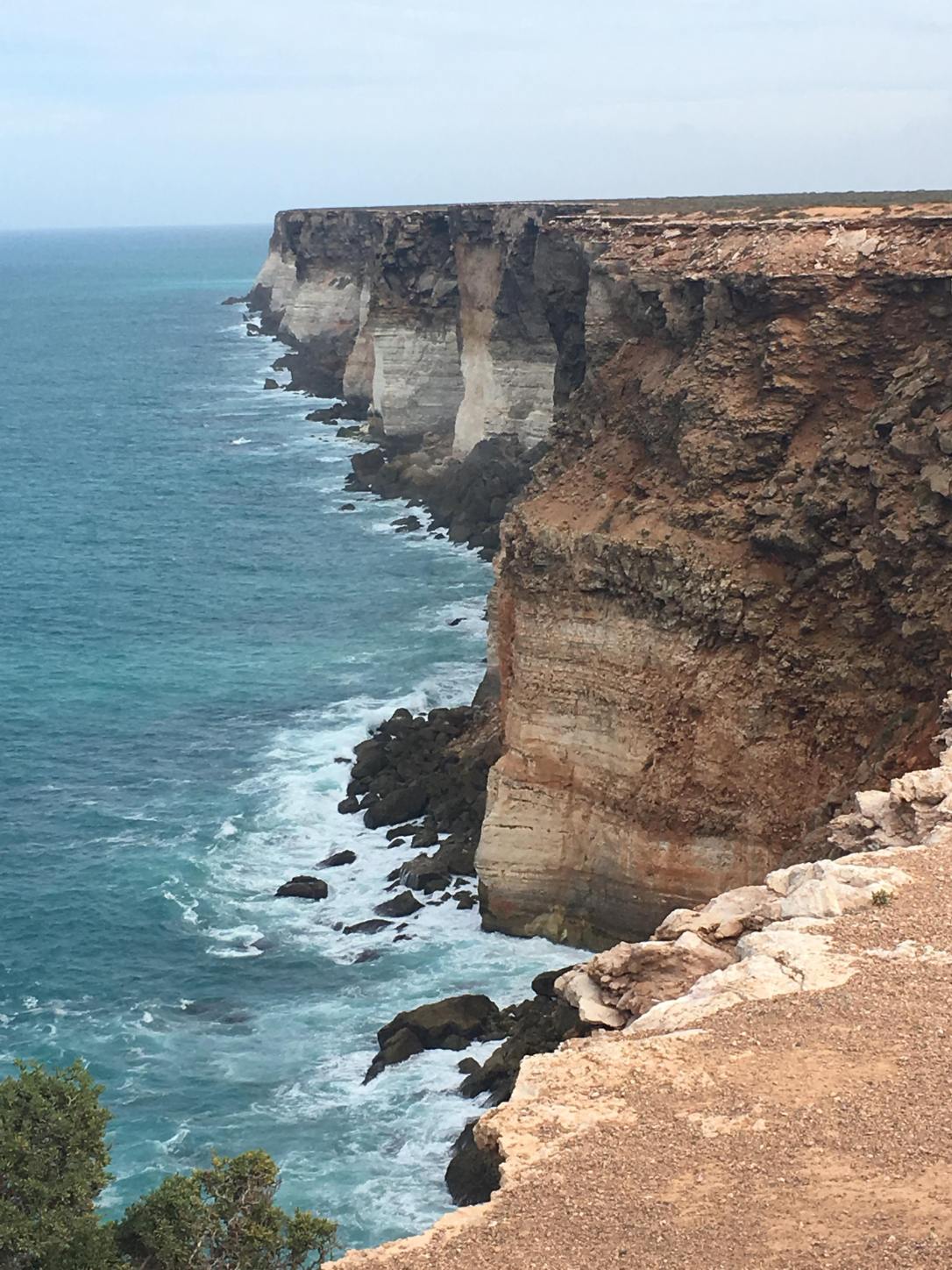 From here it was a short drive to the SA/WA Border!!!!!   We stopped here for lunch and then before crossing the border into WA we were all checked for fruit, vegies and honey.

There were a lot of items you could not bring into WA.    After this, it was a long drive (nearly 3 hours) to our next destination being Cocklebiddy Caravan Park, for an overnight stop ($25.00 for p/w).    Again, another very dry and dusty old park!

We were up very early the next morning as we had another big drive ahead of us as we headed towards Esperance.

Along the way we picked up a Belgian backpacker who had run out of petrol.   It’s not like us to pick up a hitchhiker but he seemed OK.  We took him to the nearest service station (33km away) which was at Norseman.   He had a jerry can so he could get some petrol and he did manage to get a lift back to his car.

Well, this was a huge driving day, one of the longest drives we had done, with a couple of stops we were basically on the road all day.    We checked into Esperance Foreshore Tourist Park late afternoon (for 5 nights).