On Friday morning we packed up and continued along the Flinders Highway to our next dinosaur trail stop at Richmond.   We checked into Lakeview Caravan Park for 2 nights.  It was a nice spot with lake views (Lake Fred Tritton) but unfortunately the lake was closed to the public due to an algae problem and the council were in the process of cleaning it up.   We were advised that the lake won’t be ready for use for another couple of weeks.   Such a shame as it would have been nice to walk down and have a swim and for Mitchell to have a play in the water park, considering it was so hot!!!

After setting up, we then headed into town to Kronosaurus Korner where we did a tour of the museum ($25.00 per adult).    It was much bigger than Hughenden.   It is Australia’s  premier marine fossil museum.    We saw ‘Penny’ the Richmond plesiosaur – Australia’s best vertebrate fossil, ‘Krono’ Kronosaurus queenslandicus – a 10 metre, giant marine reptile and ‘Wanda’ – Australia’s largest fossilised fish.

Although the museum has mostly marine creatures, there are two dinosaurs; ‘Mia’ Minmi paravertebra – with impressions of its fossilised skin, it is considered to be Australia’s best-preserved dinosaur skeleton and ‘Marlin’s Beastie’ sauropod – a gigantic plant-eating dinosaur.

The museum offers hand-held audio guides so you can tour the museum at your own pace.  It starts with a small theatre presentation where you can step back in time and watch the prehistoric sea monsters come back to life.  They have a modern, fully equipped preparation laboratory, where you can view fossils being processed (via a glass viewing window). The preparation techniques carried out at Kronosaurus Korner are of a world class standard, with some of Australia’s best and most significant fossil finds having been prepared for display in the laboratory.

There is also a Krono Kids Corner!!!! 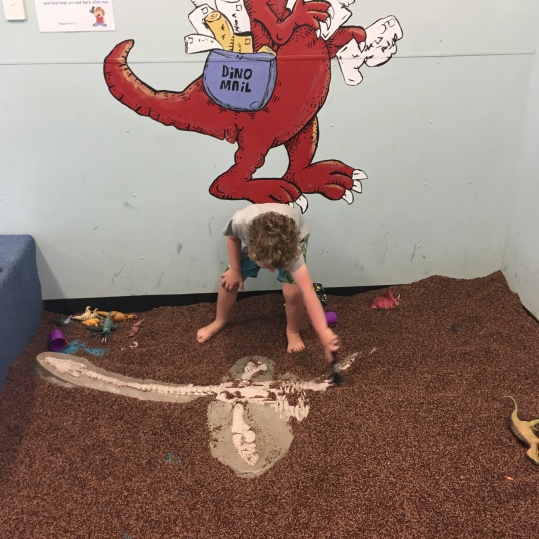 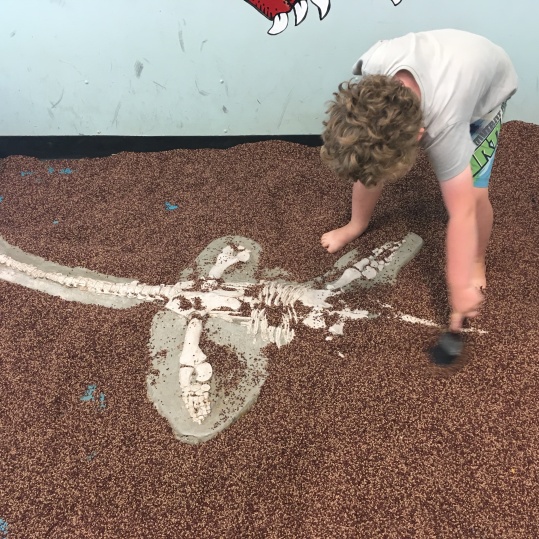 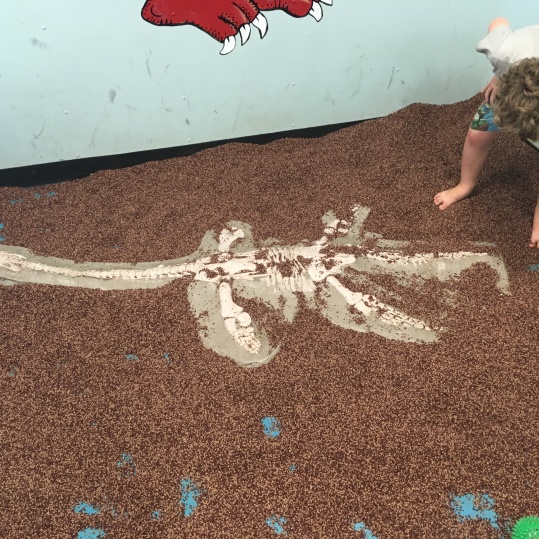 The fossilised jaws of a cooyoo fish were discovered on a property near Julia Creek (2 hours west of Richmond) a few years ago and have now been prepared and on display at the museum.   Kronosaurus Korner have a competition running to “Kiss and Name the Cooyoo”. The name we chose was “Clarence” the Cooyoo!! LOL LOL 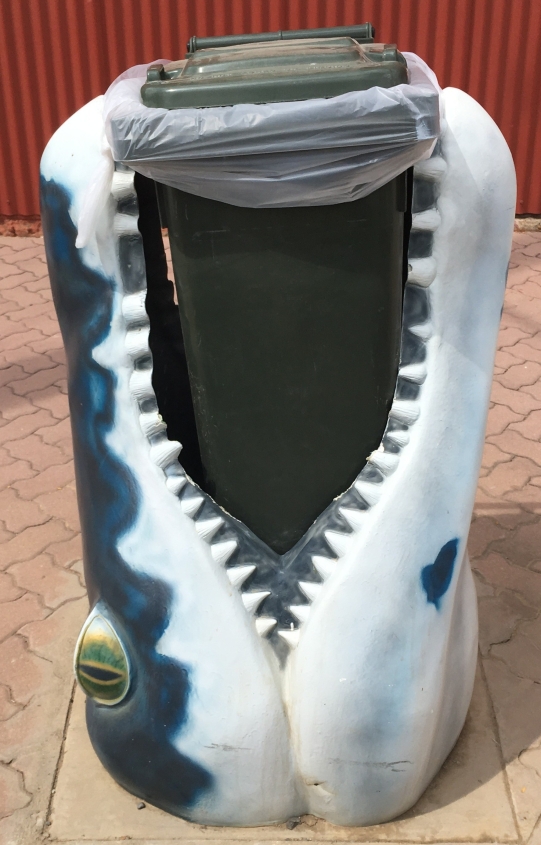 On Saturday morning we got up early and headed out of town to a quarry site for our very own fossicking.  It was very hot so had to start early morning and we had the whole area to ourselves.   Fortunately we found a tree for shade and we spent some time digging around and we did manage to find some small marine fossils.  Mitchell was very excited to find some fossils.  We found a fish tooth, belemnite, inoceramus shells and cropolites (fossilised pooh!!!!!). After a couple of hours we then drove to another fossil hunting site in the bush.  There we met Michelle, a Curator from Kronosaurus Korner and 2 international volunteers from Canada working on preserving a marine fossil find. It was great to see the experts at work and watch their procedures in preserving.

That afternoon we checked out the Richmond Races.  We caught the free shuttle bus and then it was free entry in.  They had a jumping castle and kids playground so Mitchell had a good time and then he started playing with the local kids so he enjoyed his afternoon there.   There were 5 races and we lost on every one.  We couldn’t even see who won each race as they finished in a cloud of dust, no grassed racetrack here!!!!!!   We had lots of drinks and enjoyed the local country atmosphere.     It was a great afternoon out and at the end of the day we caught the shuttle bus back to the caravan park.

Well, I have never seen a horse race end in a cloud of dust before!!!!!! 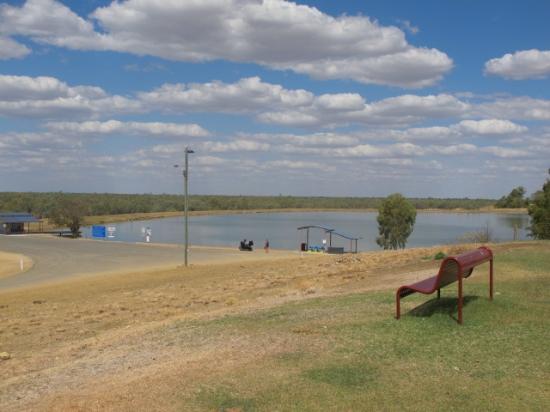 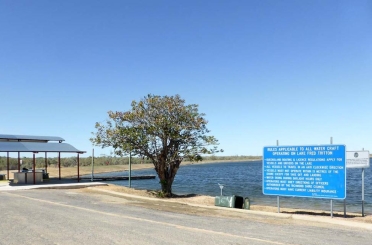 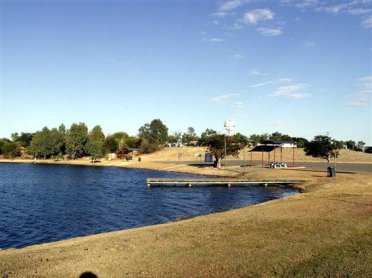 Lake Fred Tritton was constructed in 2003 to create a water sport recreational area using water pumped from the Flinders Rivers.    The lake takes its name from the former mayor of Richmond Shire, the late Fred Tritton.   It has a maximum depth of 8 meters and a 1.2km circumference.

On Sunday morning we packed up and then I towed the caravan to Julia Creek which was about an hour’s drive.  Aside the towing course we did back in June, this was my second drive.    I was happy to do the hour and if I can drive an hour a day or every couple of days that will help with my confidence in towing the caravan.   It was so nerve racking when those big road trains go past you!!!!!!

After Julia Creek we then continued further west onto Cloncurry.  We checked into the Oasis Caravan Park for 1 night, another hot and dusty small country town.    We had a drive around town and then headed back to the park where we had a swim in the pool for the afternoon and then Andrew watched the Bathurst 1000 car race.