As we travelled to Forbes on the Newell Highway we stopped off to see “The Dish” along the way.

The Parkes Observatory is a radio telescope observatory, located about 20 kms north of Parkes.   It was one of several radio antennas used to receive live, televised images of the Apollo 11 moon landing on 20 July 1969.   Its scientific contributions over the decades led to the ABC to describe as the ‘most successful instrument ever built in Australia” after 50 years of operation.

The Parkes Observatory Visitors Centre allows visitors to view the dish as it moves.  There are exhibits about the history of the telescope, astronomy, and space science, and a 3-D movie theatre (which you have to pay to watch). 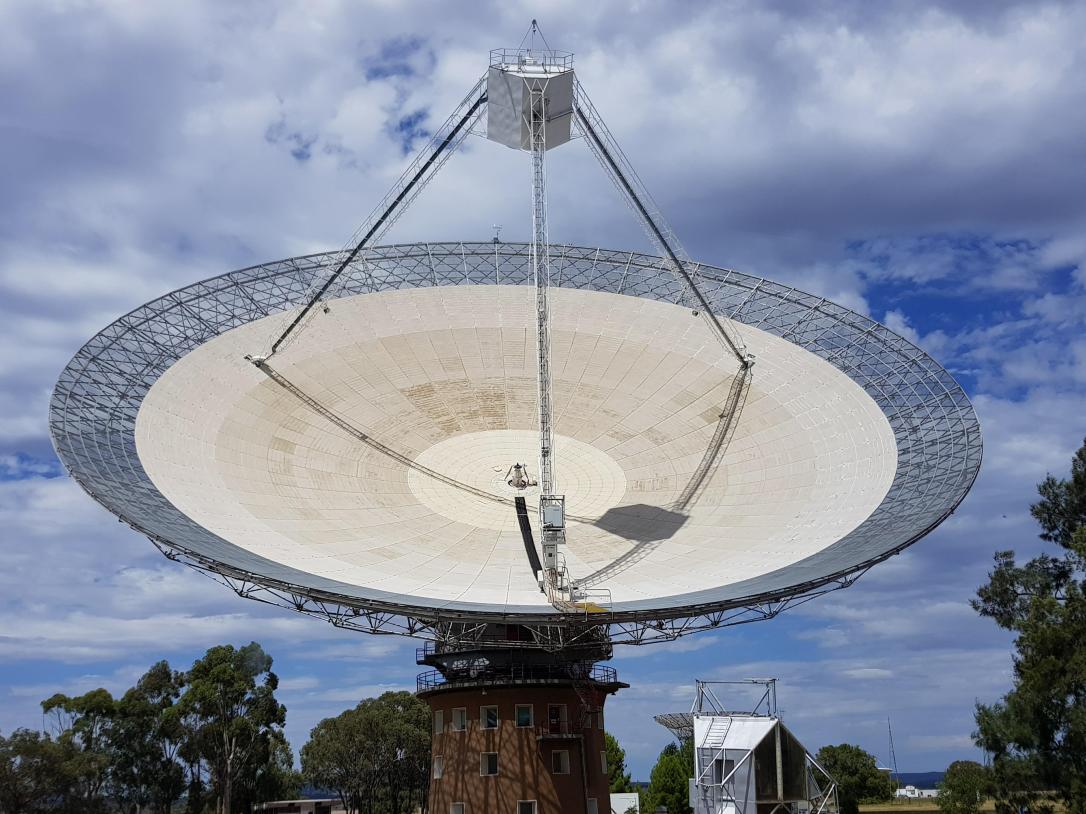 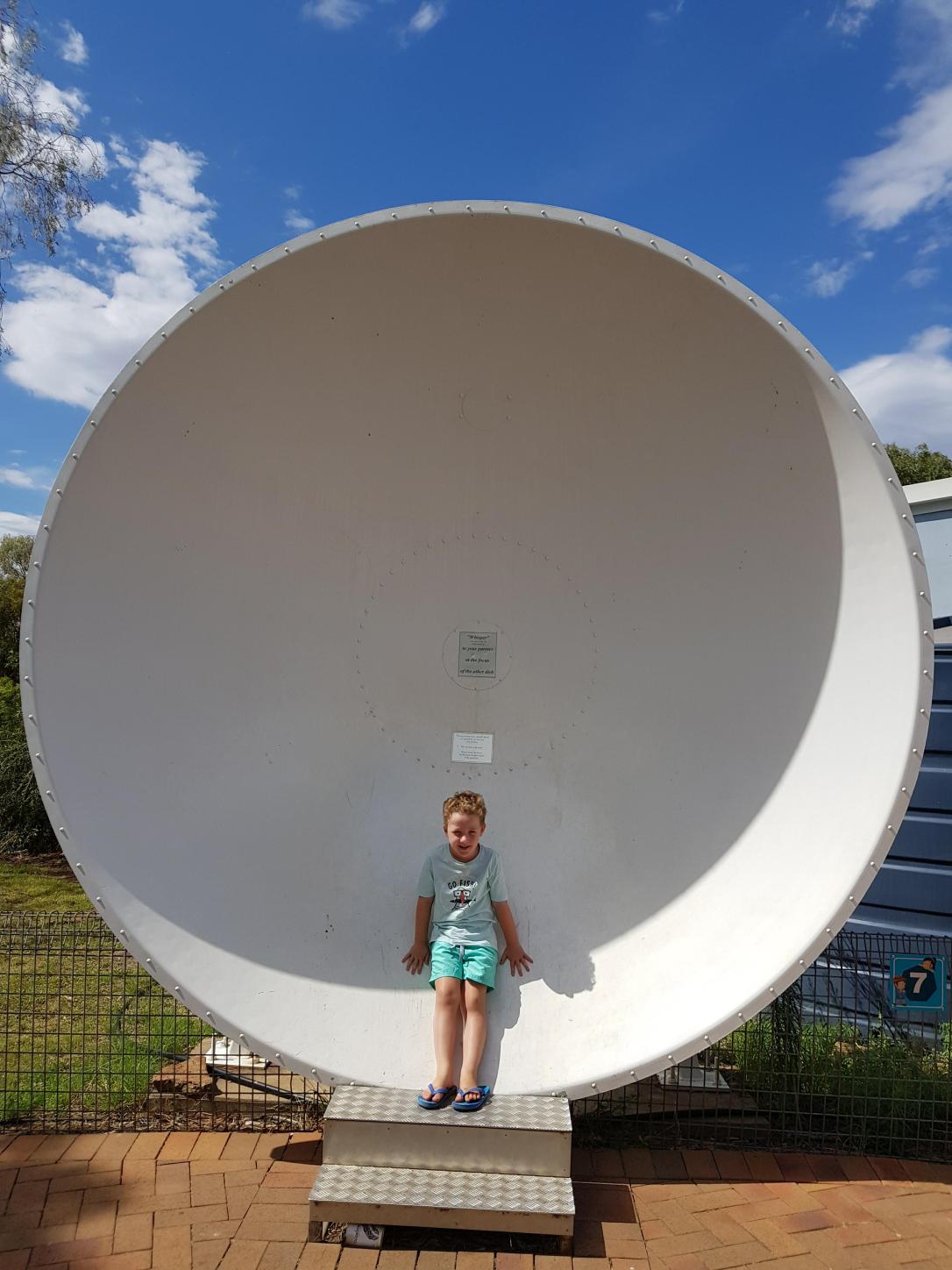 A movie has also been made.   The Dish is an Australian movie made in the year 2000 that tells a somewhat fictionalised story of the Parkes Observatory’s role in relaying live television of man’s first steps on the Moon during the Apollo 11 mission in 1969. It was the top grossing film in Australia in 2000.   It starred Sam Neill and was directed by Robert Sitch.

We checked into the Country Club Caravan Park, Forbes for 3 nights.    Parkes was completely booked out so we were lucky to get a site in Forbes, which was about a 25 minute drive to Parkes.

We met up with Andrew’s Dad and his wife (John and Janis) on the Saturday morning and we set up our chairs ready for the big parade!!!   OMG, it was sooo cold!!  After getting used to 40 degree days the past couple of weeks, I couldn’t believe the change in the weather.   Instead of driving all the way back to Forbes to get warmer clothes, I went to the shops and bought Mitchell and I jackets from Big W LOL LOL.

The Elvis Festival program was jam packed all weekend with the big parade on Saturday morning, Elvis impersonators roaming around (some good and well, some not so good either LOL), Elvis buskers, free entertainment, food and markets stalls, kids rides, magicians, Elvis and Priscilla look a like competitions, the Elvis Gospel Service held on Sunday morning, there were also lots of concerts and karaoke in all the clubs and pubs.    We even saw Lisa Curry-Kenny and her Elvis impersonator partner there too!!!! 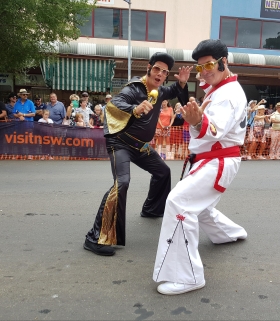 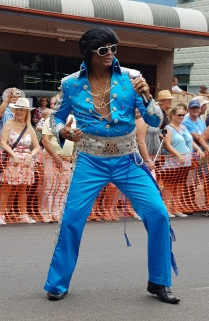 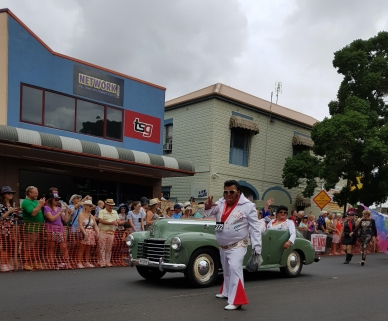 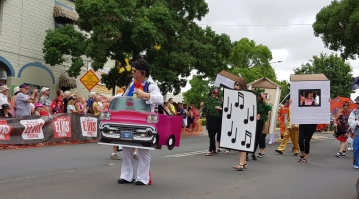 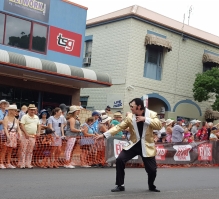 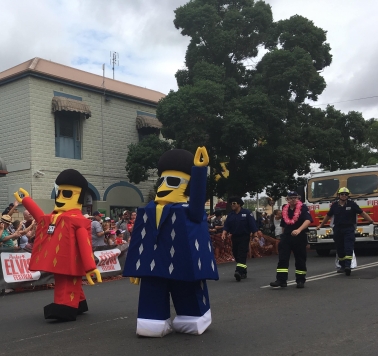 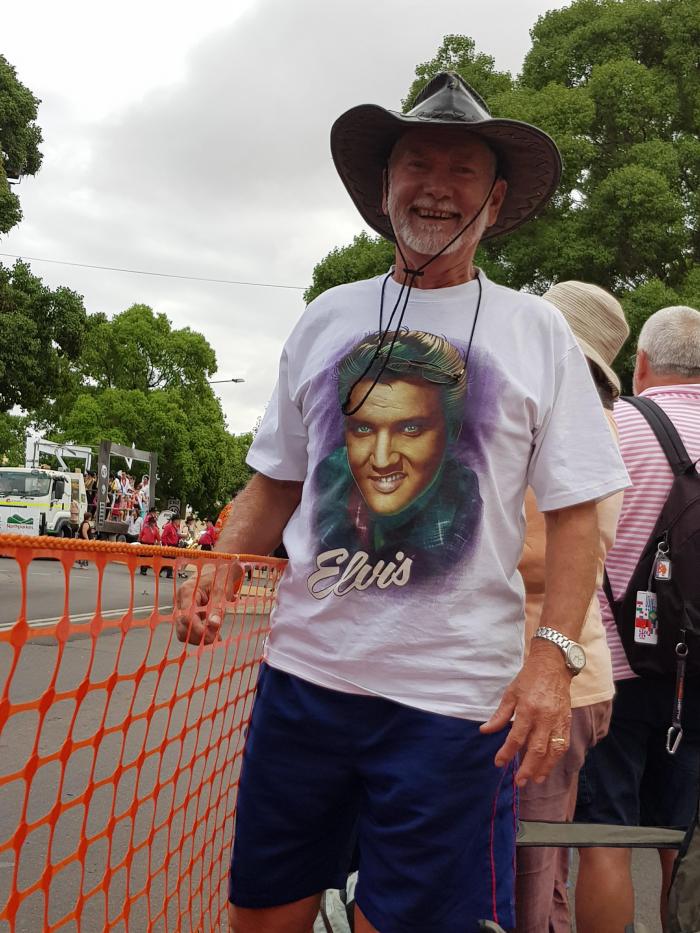 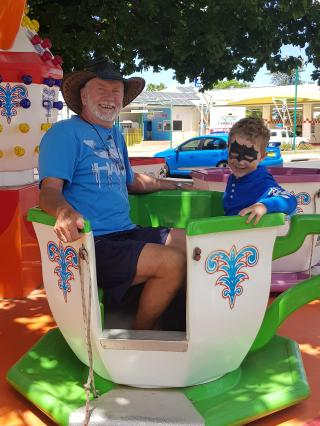 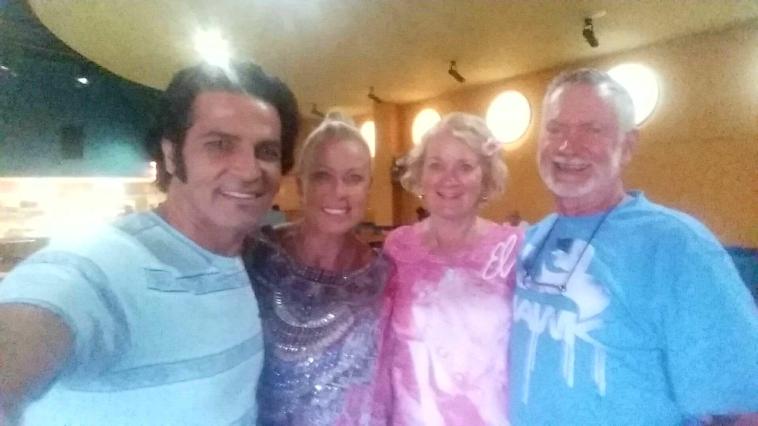 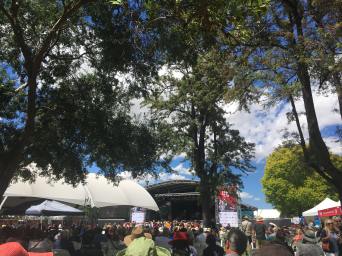 Sir Henry Parkes (1816–1896)   was a politician and was premier of New South Wales five times.  He was born in England and he arrived in Australia in 1839.   He was elected to the New South Wales Parliament in 1854 and helped introduce laws which improved hospitals and prisons and the lives of small farmers.   Parkes has been called ‘The father of Australian federation’ and so the town was named after him.

We had a great weekend attending the Elvis Festival and to also spending time with John and Janis.     We packed up on Monday morning and travelled down the Newell Highway and then on to the Burley Griffin Way to Griffith.

When we arrived in Griffith that afternoon, my mum was there which was a lovely surprise!!!!    Mitchell was very happy and excited to see his Nanny again (we hadn’t seen her since Xmas!!!)

One afternoon, we checked out McWilliams Wines in Hanwood.    The sales manager, Paul took us on a tour around the winery followed by some wine tasting!!!   Had a great afternoon there.   Best wine and port we have had in a long time!!!!!

We had a fantastic week in Griffith.   We didn’t do alot of sight seeing in Griffith, I just wanted to spend time with my cousins.  I hadn’t seen them since our wedding in 2016!!!   Andrew did have the car serviced and upgrade suspension checked and fixed whilst we were there though.

We left Griffith on Tuesday morning (23/1) and headed south out on the Kidman Highway.    We were about 25 kms out of Griffith when we went over a bridge and heard a thud and something didn’t feel right and there were some strange noises going on so we quickly pulled over!!!  OMG, the hitch snapped off the A frame!!!!   We were very lucky not to lose the caravan completely, would have been all over red rover.   We called NRMA and we had to get the caravan towed back to my cousin’s place.   I have to say its not a good feeling to see your caravan being towed!!!!! 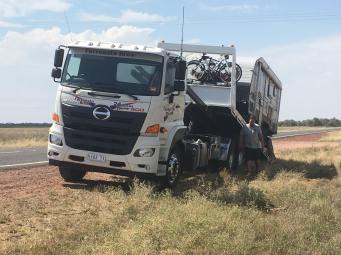 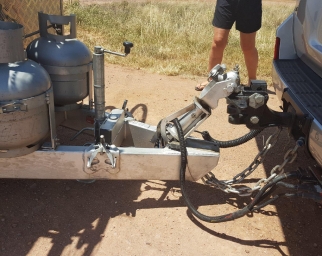 Fortunately, my cousin Paul was able to take Andrew to his workshop the next morning and Andrew was able to fix everything.   That afternoon we said our goodbyes for the second time and we set off for Lake Mulwala.
Lake Mulwala is on the NSW/Victorian border.  The twin towns of Yarrawonga-Mulwala, separated by the Murray River, boast a large and beautiful man-made lake.   We spent 2 nights here free camping.   We were able to park up right in front of the lake – it was beautiful.   There were only a few caravans around so it was pretty quiet.   Andrew and Mitchell went fishing in the lake and caught a Yellow Belly. 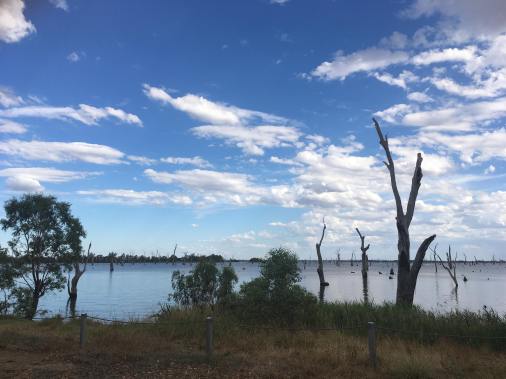 We left Lake Mulwala on Friday morning and headed to Melbourne.   We arrived at our caravan park late Friday afternoon and it was disgraceful, such a dump.  There were only 3 caravan parks close to the Spirit of Tasmania.   There were also no free camping spots around Melbourne at all.      I had tried the Big4 parks a few weeks earlier and they were all booked out so Honey Hush was the only one left with vacancies, now I know why.
Unfortunately as it was a long weekend and still school holidays we couldn’t get in anywhere else.    I rang the Big4 parks again and we did manage to get in to the Big4 at Coburg for Saturday.    We went out for dinner and drinks with friends on Friday night and then we packed up early on Saturday and we drove to the Big4 Coburg caravan park (north of Melbourne).      We weren’t leaving for Tasmania until Sunday night so over the weekend we did a couple of dry runs to the dock to see what the best way was for when  we were towing the caravan and how long it would take.
On Sunday evening we travelled to Melbourne Port and checked in to the Spirit of Tasmania for our night sail.   The whole check in process and drive on to the ship went smoothly.   It was a very hot afternoon.   It was good that it was daylight savings as we still had a couple of hours to walk around the ship and see everything, have dinner and a few drinks and see the Melbourne foreshore as we departed!!! 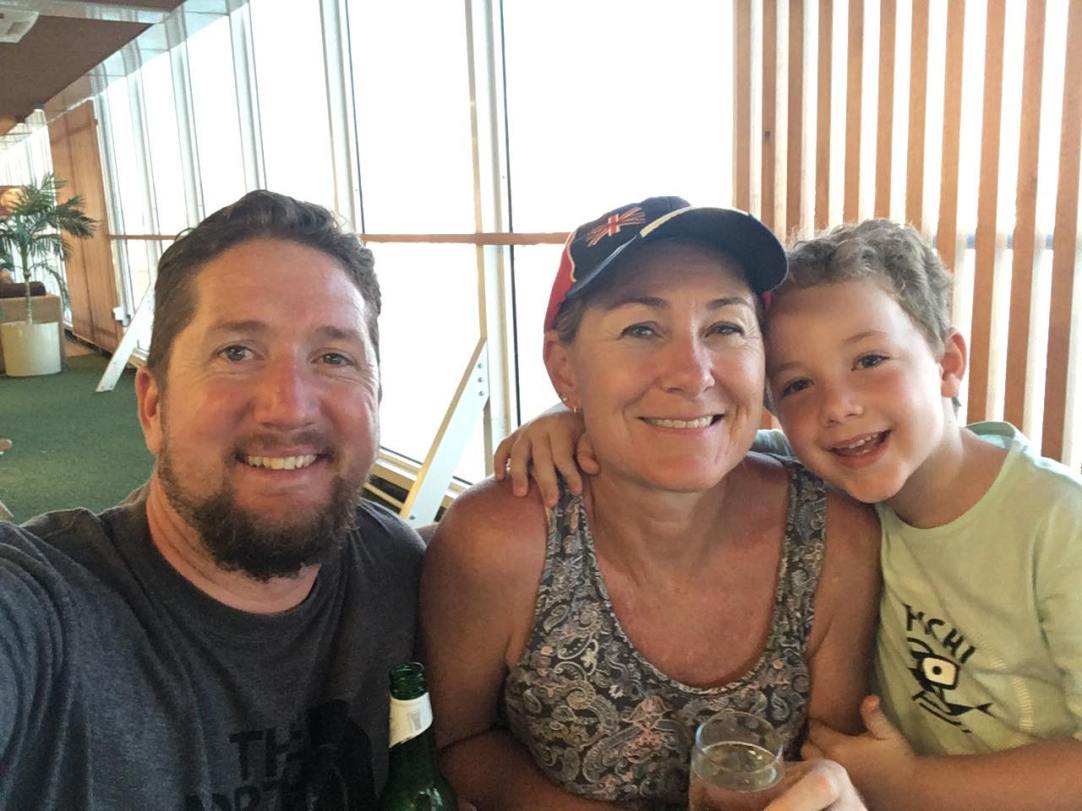