We left Airlie Beach on Friday morning (19/8/17).  Travelling inland most of the scenery was of sugar cane, and more sugar cane, oh did I say there was sugar cane!!!!!  LOL plus lots of banana plantations as well!!!

We stopped at Home Hill (about 2 1/2 hours drive from Airlie) for a free camp overnight.  It wasn’t exactly a camping spot as such but a street between the main drag and the railway line and it was lined with caravans.  It’s a very small old country town.   We had a drink in one pub at one end of town (that was a bit ordinary) and then we went to the other end of town for a drink and dinner at the Malpass Hotel.   It had a children’s playground and a lovely outdoor eating area!!  Dinner was great!!

Mitchell needed to have a haircut so we decided to get that done in town.   Ok, no big deal to some but  I have a girlfriend who always cuts Mitchell’s hair at home so this is the first time Mitchell had his haircut at a hairdressing salon!!!  He did so well sitting in the chair – and a great haircut too!!!  Forgot to take a photo of him!!

We decided to stay at another Big4 Holiday Park – Woodlands.    This was about 20 minutes north of Townsville.  No where near as good as the Big4 at Airlie Beach!!!!  But it  did  have a lovely big pool (but the adults were not allowed on the slides- and no it was not heated either – again, too cold for me to swim!! LOL), a waterpark, a jumping pillow, kids playground and an 18 hole putt putt golf course.

Townsville – the biggest city of North Queensland, home of the Cowboys NRL Team and the V8 Supercars Race which is held annually in July!!

We just relaxed at the caravan park on Saturday.   On Sunday we went for a drive down to the foreshore and had a walk around.   Warm weather and sunny skies again and we had lunch in the park across from the water which was lovely.    There was a triathalon going on that day so there were lots of runners and cyclists zipping past you.   We had a drive around the city in the afternoon and then back to the caravan park.

That afternoon, we played a round of putt putt golf.  This was the first time for Mitchell and Andrew was teaching him how to play.  Mitchell did really well, considering he had never held a golf club before.  Even though Mitchell writes with his left hand, he was still working out whether to hit the ball left or right handed.    Later on, Andrew met a couple of guys (Noel and Daniel)  from the park and they went out to the River and put out some crab pots.  Mitchell was very excited to go with them and help set up the crab pots.     Andrew, Noel and Daniel then went back out there late at night to see if they had caught any.     Bloody Crazy, wandering out there in croc infested murky and muddy waters!!!  Andrew was covered up from head to toe but Noel got smashed by midgies and was so bad he had to have antihistamine tablets!!   But they did catch some crabs!!  So to them it was all worth it!!!

On Monday, we took a trip to JB-HiFi and Andrew bought his new toy!!   He has been contemplating about buying a Drone for ages! 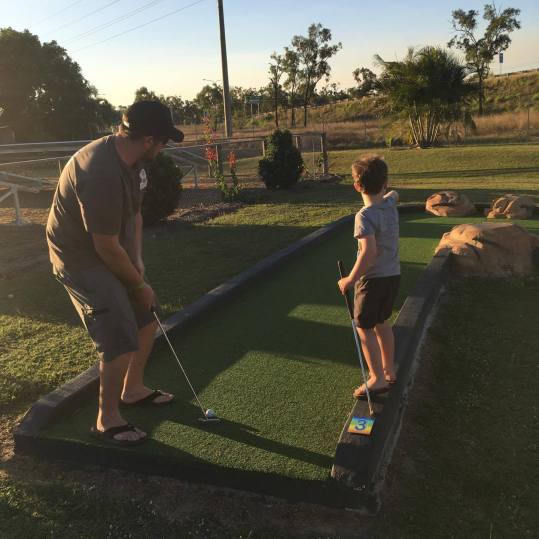 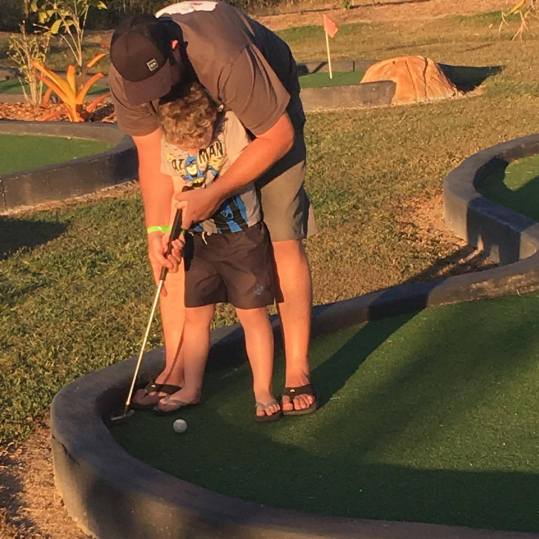 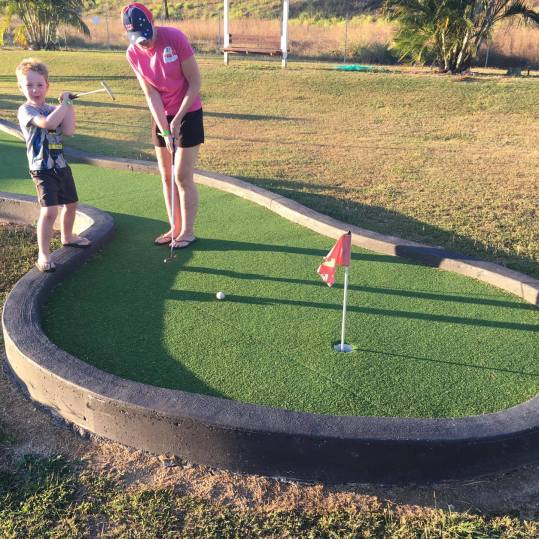