From Seisia Holiday Park we travelled down the Overland Telegraph Line and then stopped at Bramwell Junction Roadhouse for lunch before continuing on kms of dirt and sealed roads to Weipa (on the west coast). 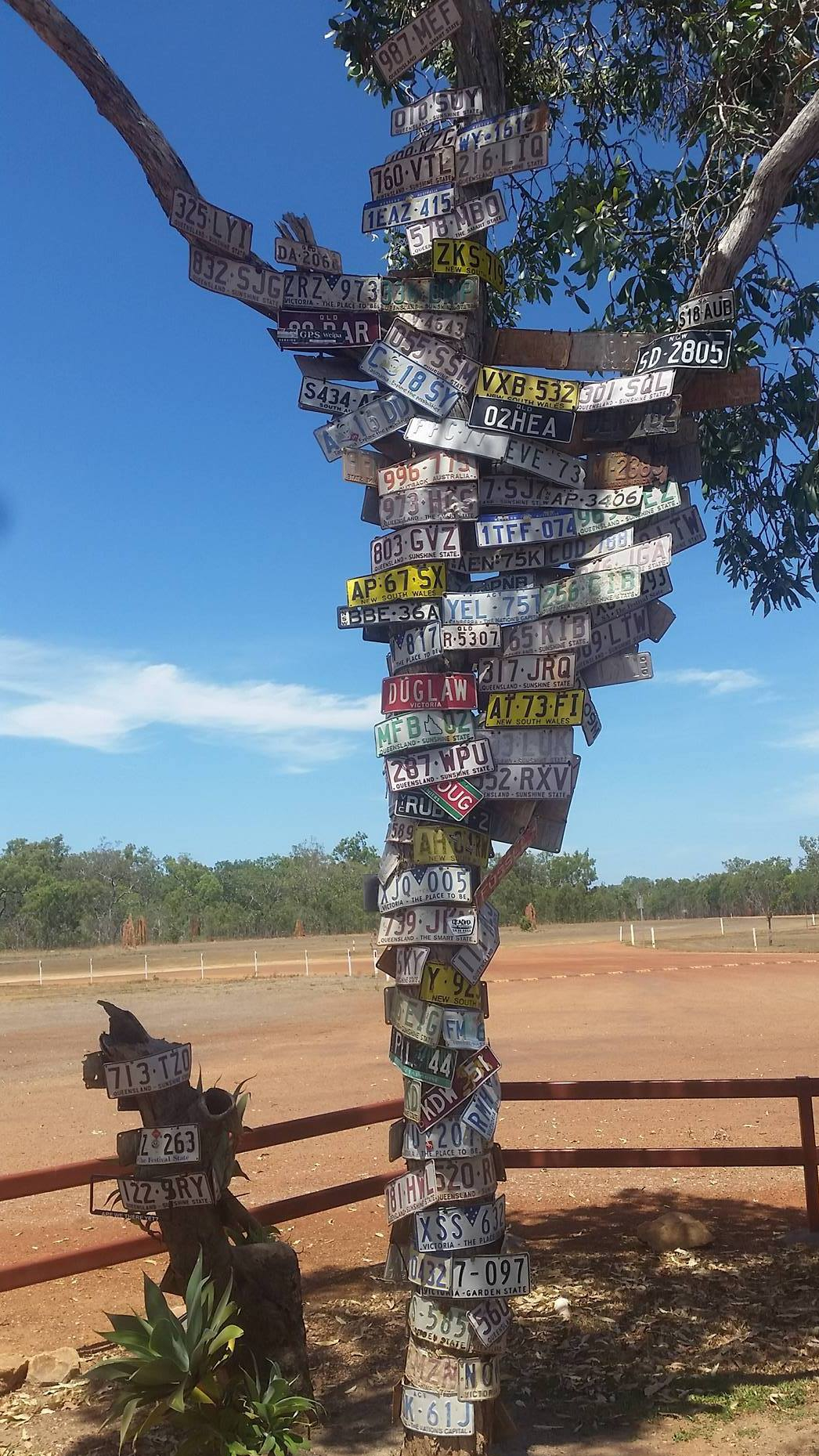 We checked into Weipa Campground and Caravan Park for 5 nights.   Very hot and dusty but we were right on the beach which was lovely.  Again, of course, no swimming but they did have a pool which was great!!! 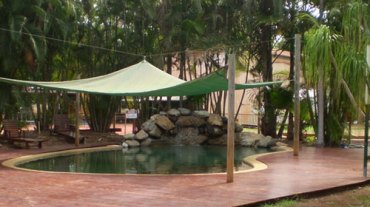 We saw some sensational sunsets on the beach!! (sorry, my photography skills don’t cut it at all!!!). 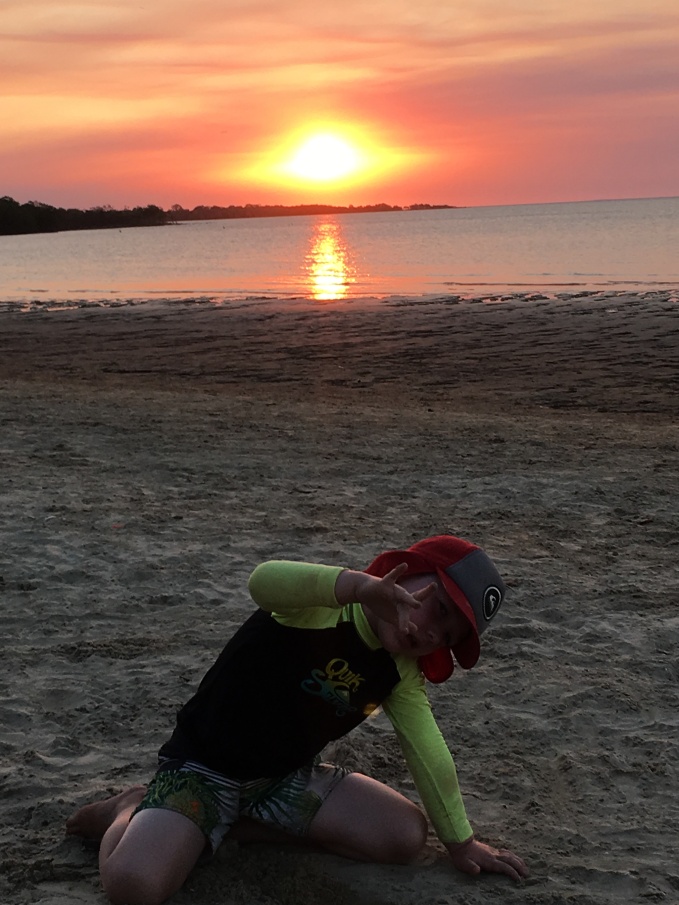 Weipa is the largest town in central Cape York.   It is not touristy but more than anything it is a mining town, and consequently quite industrial and expensive.   But it is on some colourful land with bright red soils and surrounded by blue waters, which makes even an industrial town look beautiful.

The town thrives well enough on mining which has now created bus tours to Weipa Mine ($40.00 per adult).    The mine used to be a Comalco mine but is now owned by Rio Tinto.

It’s also one of the best places in the Cape York area to fish, it’s a main attraction of Weipa, very popular with the locals and tourists!!!  There are fishing spots everywhere – on beaches, headlands, river mouths.

Andrew and Daniel hired a boat and had a great day out fishing!!!  There was success this time with them catching a variety of fish!!!!  We enjoyed a feast of gold spotted rock cod, cobia and tusk fish.

Weipa has a small shopping centre with a Woolworths so that was good (feel like I am forever food shopping LOL LOL).    We had dinner out a couple of nights at Weipa Bowls Club.   Wonderful food!!  They also had a great kids playground too!!!

We did a drive around the area one day and had lunch at Lake Patricia (had to take a photo – my middle name is Patricia!!).    They had a kids playground, shaded seating and BBQ facilities.   Beautiful lake but again, no swimming!!! 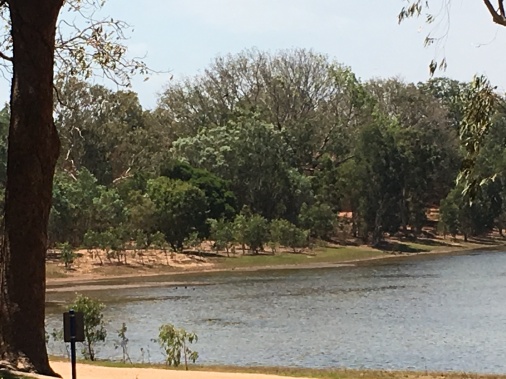 From Weipa we drove down to Port Stewart (which is on the east coast) for a free overnight camp.  It wasn’t as nice as we thought it would be, we couldn’t camp anywhere near the water due to crocodiles and there were heaps of mangroves everywhere so lots of midgies.   It was windy too.  Oh well, it was just for the one night!!

Since we had already travelled the main development road going north, we thought it was time get off the map and explore.  We heard about a track from Port Stewart  through the Lama Lama National Park which brought you out in the Lakefield National Park. After talking with the Port Stewart rangers  and hearing that it had just been graded we decided to give it a go.  This road was better than the main development road. We stopped in at the Lakefield ranger station and had a look around and a chat. As we headed further south we encountered a few gates which we had to open and close behind us. It is fairly remote here, we only saw 1 house at Running Creek. We did see some great views as we travelled through these National parks and around and down these mountains.

Our plan was to camp at Elim Beach the next night.     After many hours and kms of dirt road driving and then going around a winding road down the side of a mountain we finally arrived at Endeavour Falls Tourist Park.   Daniel needed to fill up with fuel.     We asked the owner at the park how long until we get to Elim Beach but it was still another 1 1/2 hours or so drive.    It was already late afternoon.  By the time we drove out there and set up, etc, it would have been getting on dark so we just decided to stay here for a night.

After driving for many kms, this caravan park felt like a little oasis in the middle of nowhere!  It was such a beautiful park with lots of palm trees, good clean amenities, swimming pool, fuel and a takeaway/convenience store. 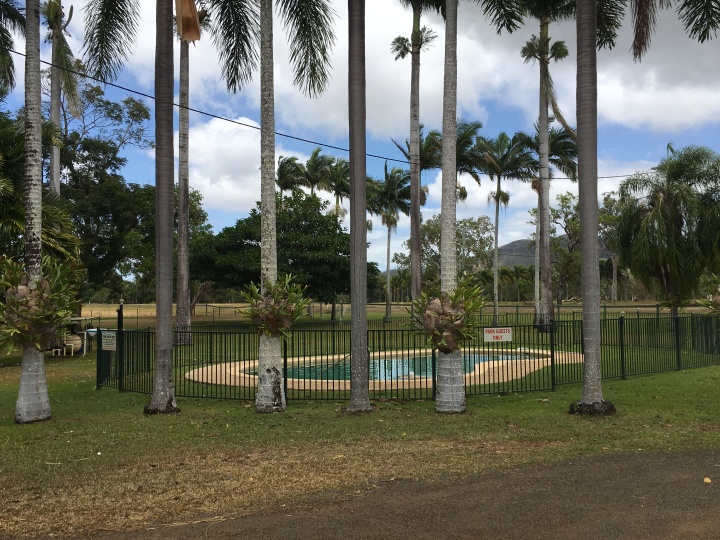 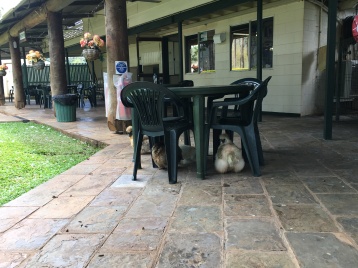 The next morning we had a walk down to the falls which were located at the back of the caravan park.  What a lovely little surprise to have this here!!!   The water was cold and we were advised not to swim!!!    It was very tranquil and peaceful.    You can also visit the falls without having to stay at the park.

We finished packing up and we said our farewells to Daniel and Stacey as we parted ways and continued on our own travels.   It was a wonderful couple of weeks travelling with them.   We thanked them for all their help along the way, it was very much appreciated.   The kids were a bit sad to say goodbye (but there was a possibility of catching up with them again in Cairns the following week).