We left Endeavour Falls Tourist Park, Cooktown and continued south and stopped at the Lions Den Hotel at Rossville for lunch.   What a great old Aussie bush pub and its also a camping spot as well.   For a gold coin donation you can write your name on the walls in the pub.  The whole place was covered with names and dates, etc, and the only place we could find with enough room to write Laughtons Living Life was on a fluoro light cover over the pool table!!   Cool!!  (And yes, Mitchell wanted another photo with the lion!!!) 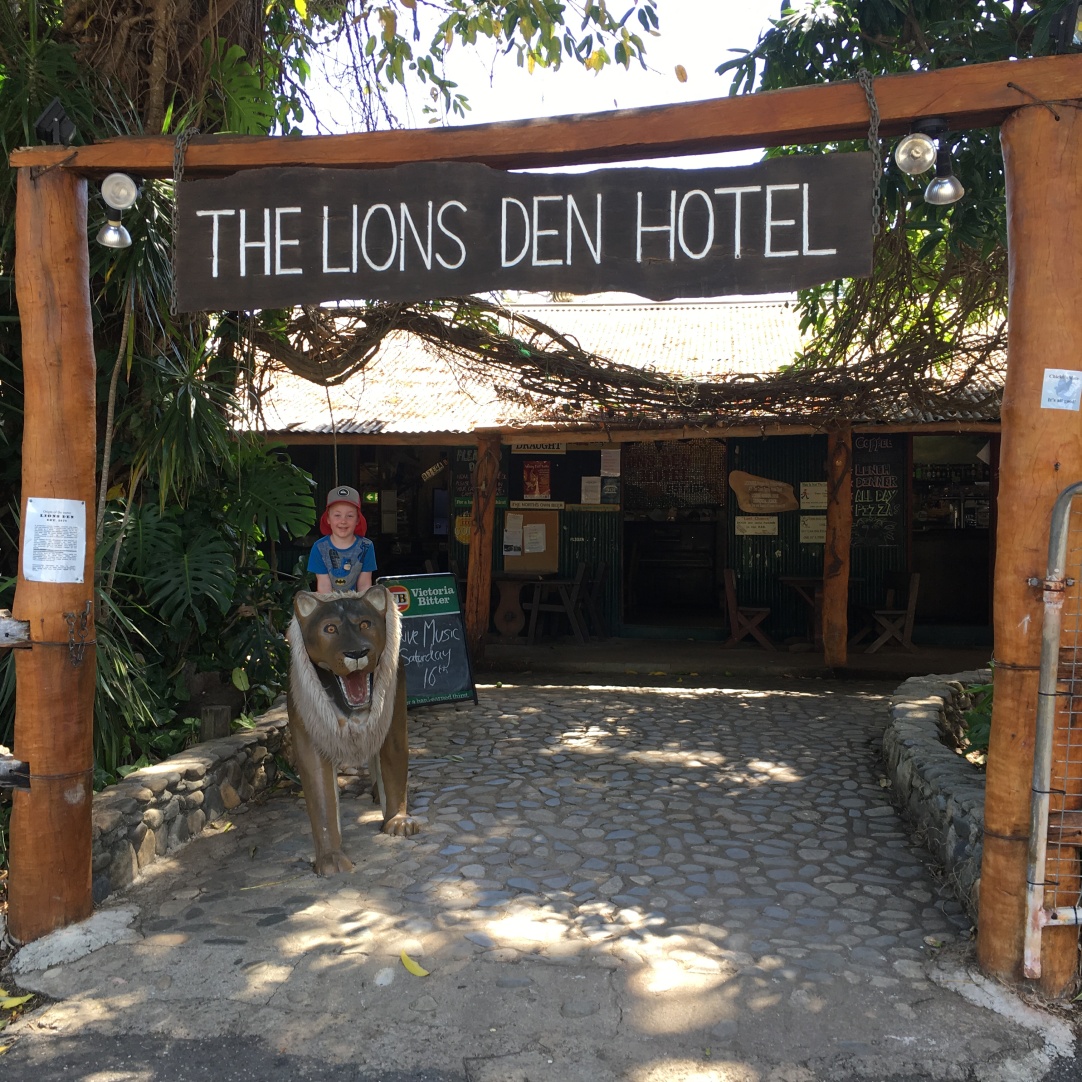 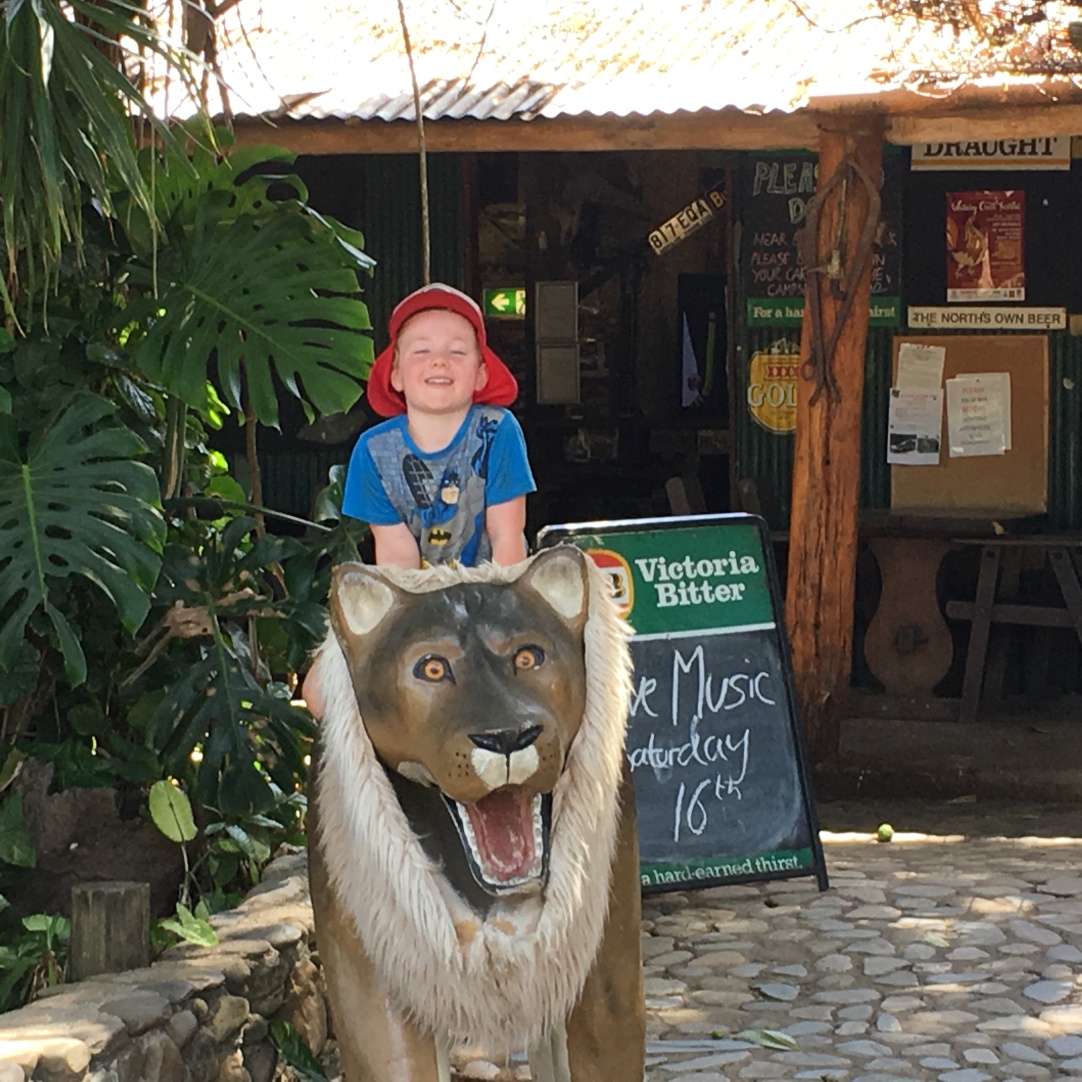 The hotel opened in 1875 and stayed in the same family for almost 90 years.  It’s an iconic stop near Cooktown, mostly because of the signatures that cover nearly every inch of the interior. The tradition began when workers from the nearby mines gave their wages to the pub and kept a tally of how much they had spent by writing it on the wall. The original writings are gone and the oldest ones there now go back about 30 years.

We travelled on the Bloomfield Track again, just kms and kms of dirt road, all winding and bumpy again, there were some steep sections and a few creek crossings.  Its such beautiful rainforest scenery, can never get tired of it!!

We travelled through the aboriginal community of Wujal Wujal and stopped at Bloomfield Falls.  Very impressive and only a short walk in, although you have to do a bit of rock hopping. 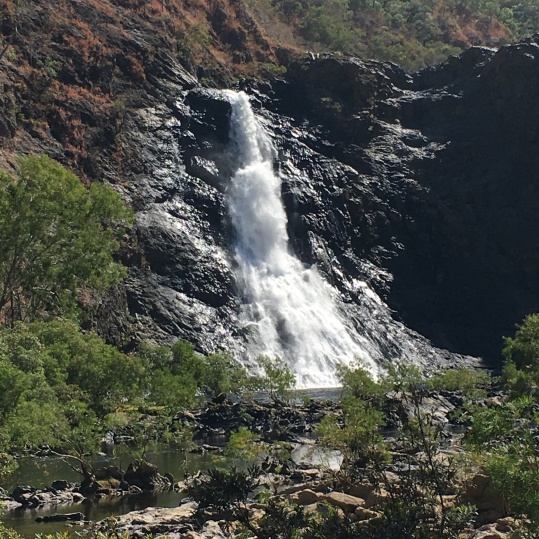 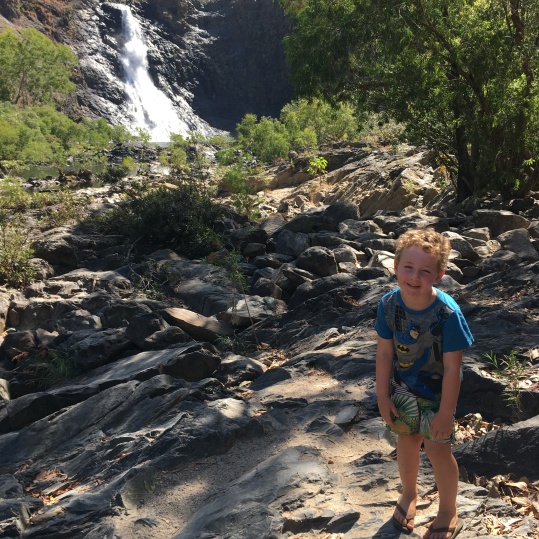 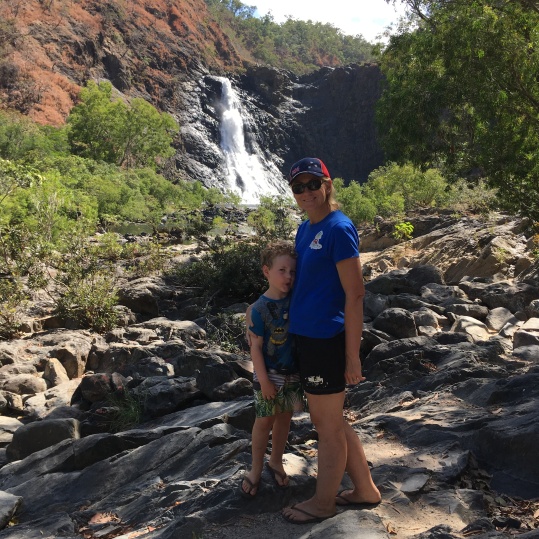 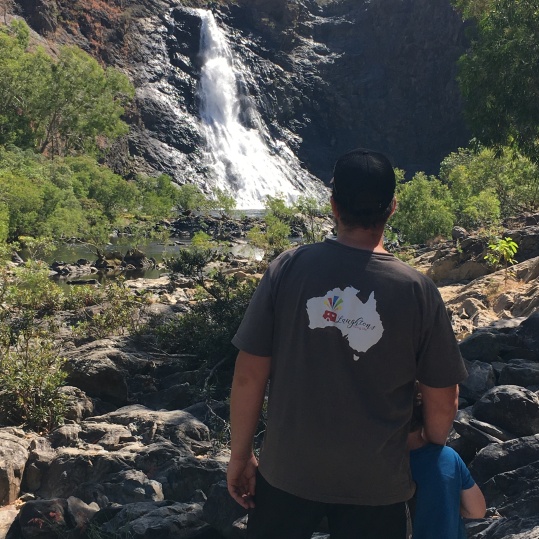 From there we travelled to Cape Tribulation and stopped at a campground called Jungle Safari first but couldn’t find a suitable campspot, everything was too hard and rocky for the tent, there was no grassed areas for camping so we went across the road to a place called PK’s, there we found a nice grassed campspot but we did read on the wikicamps app and were also told that it can get quite rowdy as they have a restaurant and bar that is open until midnight but it was getting very late in the day so we took a chance and set up camp.    It was also cheaper to stay there too.   After we set up, we had a little visitor by way of peacock through our campsite!!  That night we  did go to the bar and have pizzas for dinner and a few drinks.   I managed to sleep through most of the night (maybe because I was a bit tipsy LOL LOL and I just crashed!!) but poor Andrew was woken up by people drinking and carrying on about 1am in the morning, so he didn’t get much sleep at all!!! 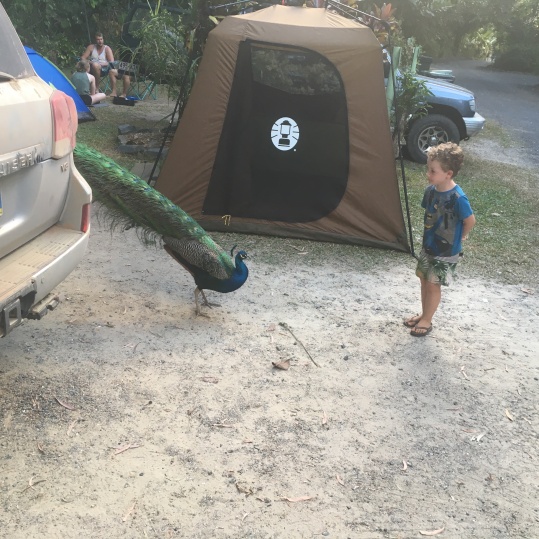 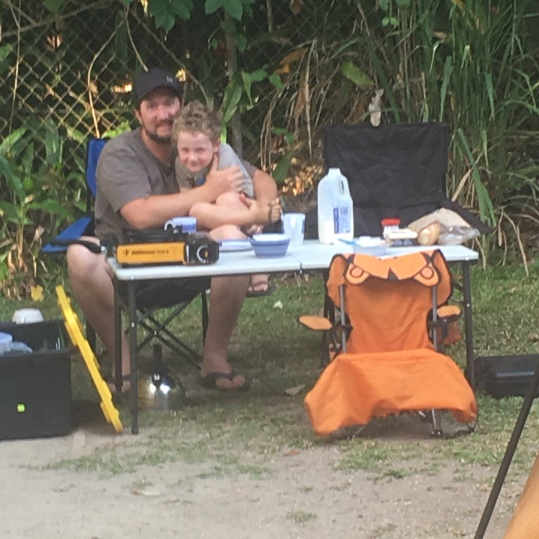 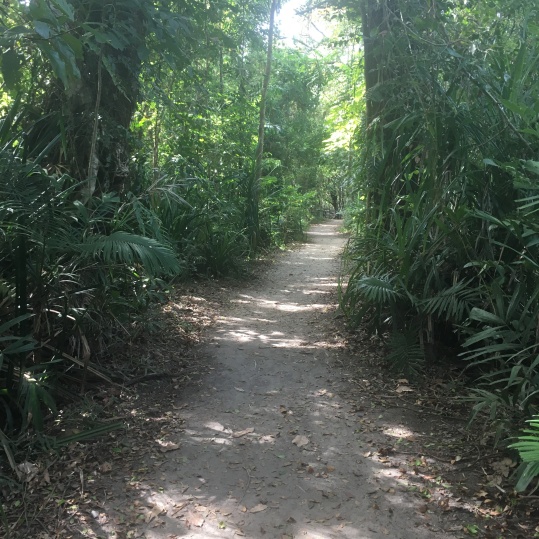 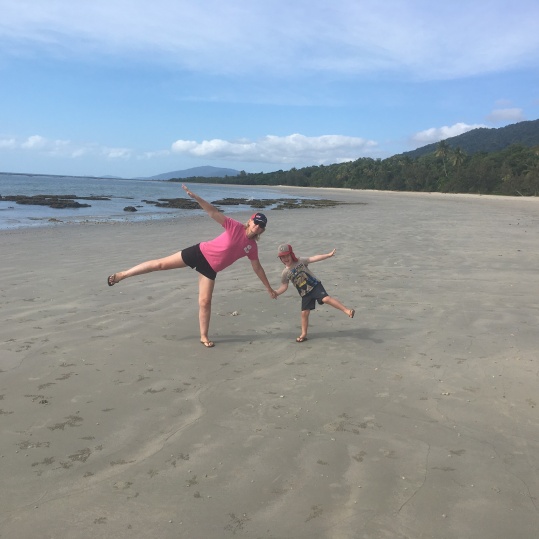 The next morning we packed up camp (Yeah!!! that was our last night in the tent!! Yeah!!).   We had a walk along the beach near the campground and then hopped into the car  and headed to the Daintree Discovery Centre where we did the 23m High Daintree Rainforest Canopy Tower tour.   And just as we were entering the centre we saw our first cassowary!!!  Wow! So I quickly took a photo (as usual not a good one!!).

It was such a beautiful and tranquil walk through the Daintree Forest walking up 5 to different viewing platforms.  It was a great tour to do with a high aerial walkway, rainforest boardwalks, dinosaur walk, reptile and fish displays, audio-visual theatre, coffee and souvenir shops. We finished off the tour with coffee and scones in the cafe.   Thoroughly recommend it. 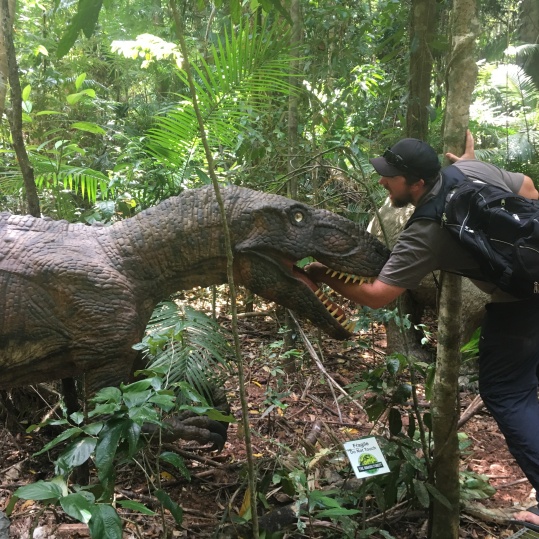 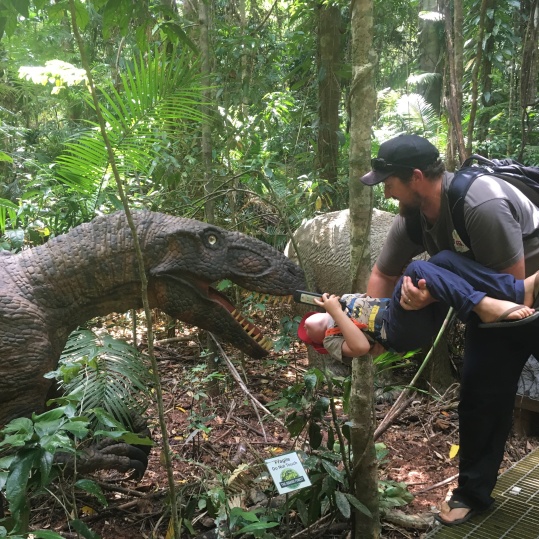 We left the discovery centre and continued our trip to Port Douglas.    The views switch between rainforest and beach.  We stopped at a lookout where the rainforest meets the reef, just gorgeous!!! (but my photography skills really don’t do the scenery any justice at all!!!)   then we hopped back in the car and headed to the Daintree Ferry.   After the ferry crossing we then continued on to the Big4 Glengarry Port Douglas. 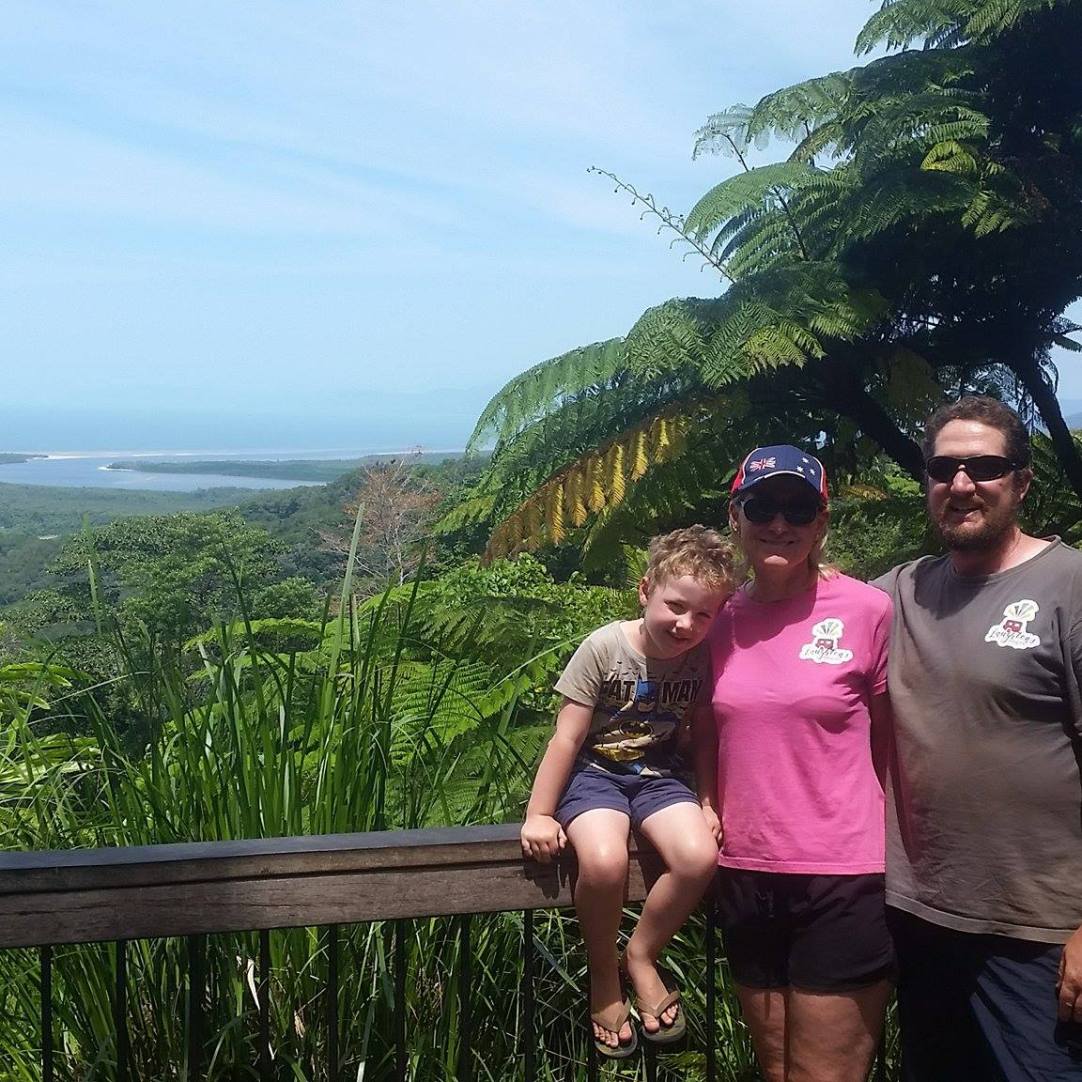 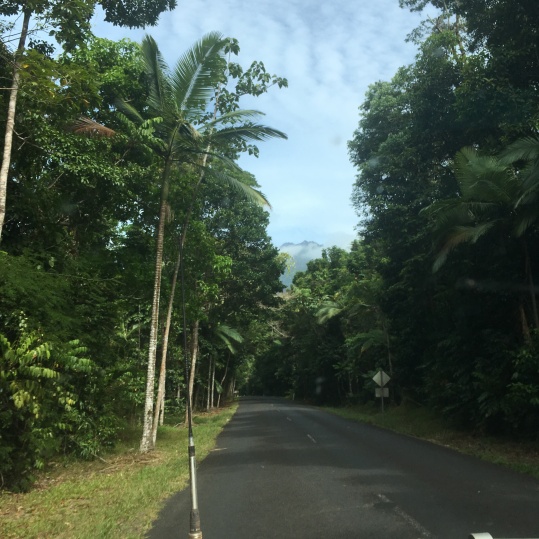