On the way to Carnarvon Gorge National Park, I was looking into campgrounds available to stay at.    The campground at the CP National Park is only open at Easter and through the Qld school holidays, another campground called Sandstone Park (which I saw on my wikicamps app) had just closed for the off-season and wasn’t reopening until March next year.   So, the only park open was called Takarakka Bush Resort. 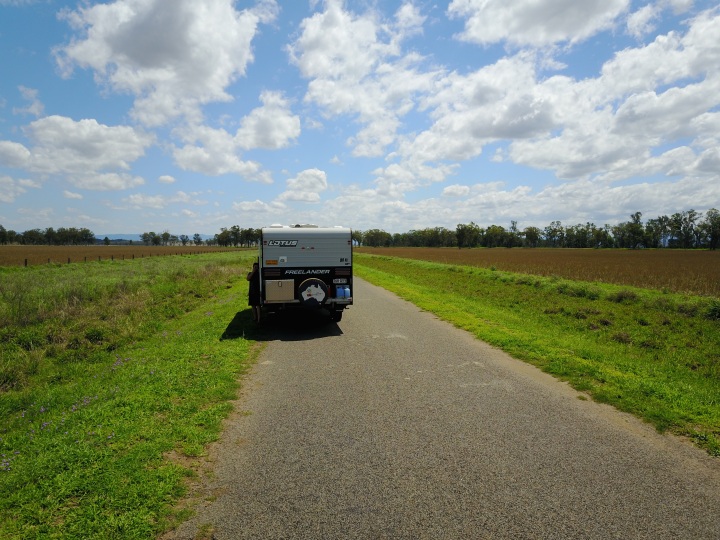 At $46.00 per night (including power and water) it was a bit expensive but there was nowhere else to stay but as the name suggests, it really was a lovely resort set in beautiful bush surroundings.   There had been some rain in the week before so everything was very lush green and there was water over some creek crossings as we drove into the park.

They had a small office and convenience store (with very slow wifi at the office) so basically we had no phone or wi-fi reception at the caravan for the whole time we were there.   We originally booked in for 2 nights but ended up staying 4!!!!   Our site was in Platypus Circle with amenities, camp kitchen, dump point and fire pits in close walking distance.  We were also near Carnarvon Creek, a fresh water “beach” which was great for a lovely swim and cool off each day.    They say that once you settle in at Takarakka, we will find our own meaning  for “Taka Time”.

The second night we were there we booked into a “Guide to the Galaxy” tour.  Since we missed out on some star gazing at Charleville, we jumped at the chance of doing this tour.   We started the night with the guide pointing out some of the brighter stars and constellations and then we got to look through a huge telescope which was 400 magnification for a close up view of the Moon and Saturn – brilliant!!!!! The guide gave us a thorough yet easy to understand explanation of what we were looking at.

The first couple of days there we just did some short walking tracks.  We were finally putting on our “hiking boots”!!!   There are 3 short easy to moderate walking tracks you can do before you actually enter the main walking track into the Gorge itself.   All are a short driving distance from Takarakka.    The first walk we did was “Baloon Cave” which was about 1km return walk from the car park.   Baloon Cave is located within a gap in Clematis Ridge used by the Aboriginal people as an entry point to the gorge for thousands of years.

From there we drove to the “Rock Pool”.    This was an easy 600 metre return walk from the car park.    It was beautiful.   We had the whole area to ourselves and we went for a much needed swim.   This is the only place in Carnarvon Gorge where you can go swimming!!  Yes, the water was cold but it was such a hot day it was so very refreshing!! 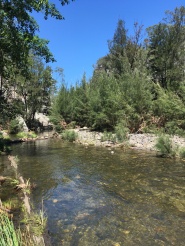 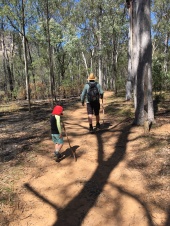 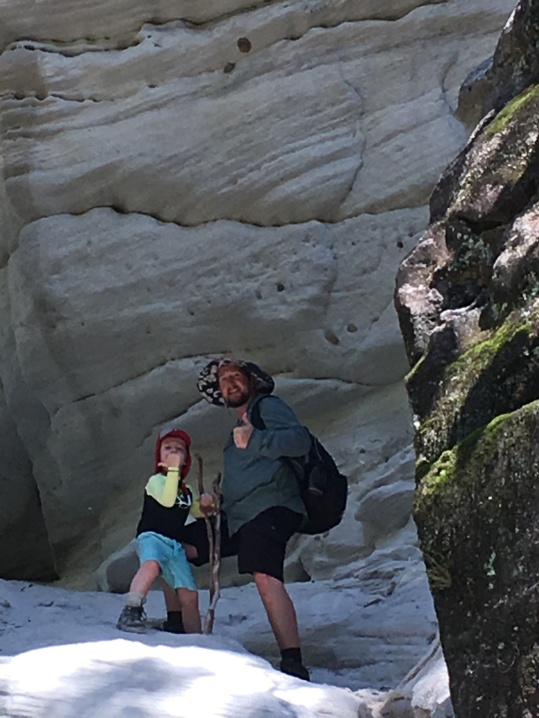 Then we took another path to Wurrumbah Gorge  where we walked right inside a gorge,  here we really had to do some skillful rock hopping and climbing.    It was so beautiful and the temperature dropped right down and was very cool hiking through here!!  Along with our drink and snack stops, that hike took us a couple of hours to do!!!

That afternoon we took a drive to the Carnarvon Gorge Visitor Centre (about a 4 km drive from Takarakka) and had a look around.  The main gorge walking track starts from here.    There were a variety of gorge tracks you can do from the 1.5 km return Nature Trail to the 87 km return Great Carnarvon Walk (now that takes about 6/7 days and is for the serious hiker!!!!).

I really wanted to do a hike into the Gorge so we decided to stay another night and head out early in the morning.

Well, that evening about 5.00pm a huge storm came through the Resort.   It was short but very intense.   Not alot of rain but the wind was ferocious.  Yes, its beautiful having all these tall trees around you but certainly not in a storm like this.    There were heaps of fallen tree branches.  We heard a loud crack and a huge branch came down only metres from our caravan!!!!   We were so lucky we never got hit as it would have done some serious damage!!!!    Very scary!!   A few other caravan roofs got hit with branches and one had their annex broken!!!

The next day as you can imagine the staff had a huge clean up ahead of them!!!    Alot of campers packed up and left.   Our site had lots of tree branches around us and was cordoned off with orange witches hats and tape.     We then had to check with the office to make sure that the gorge walks were still open and where we planned to walk was OK.

We left early in the morning for our big hike in the Gorge!!!   We decided to go to Moss Garden which was around a 7 km return trip!!!     It was a hot day but we had plenty of water and snacks.    Well, what a hike it was!!!!  The gorge was breathtakingly stunning, no words can describe it (even though some part of the gorge was burnt due to some back burning being done so that a bit yucky and smelly).      Moss Garden was beautiful.    Beneath ferns straining for sunlight, a small waterfall tumbles over a rock’s edge and it was a perfect place to cool down and rest.   Here, water drips constantly from the sandstone and sustains a lush, green carpet of mosses and ferns. 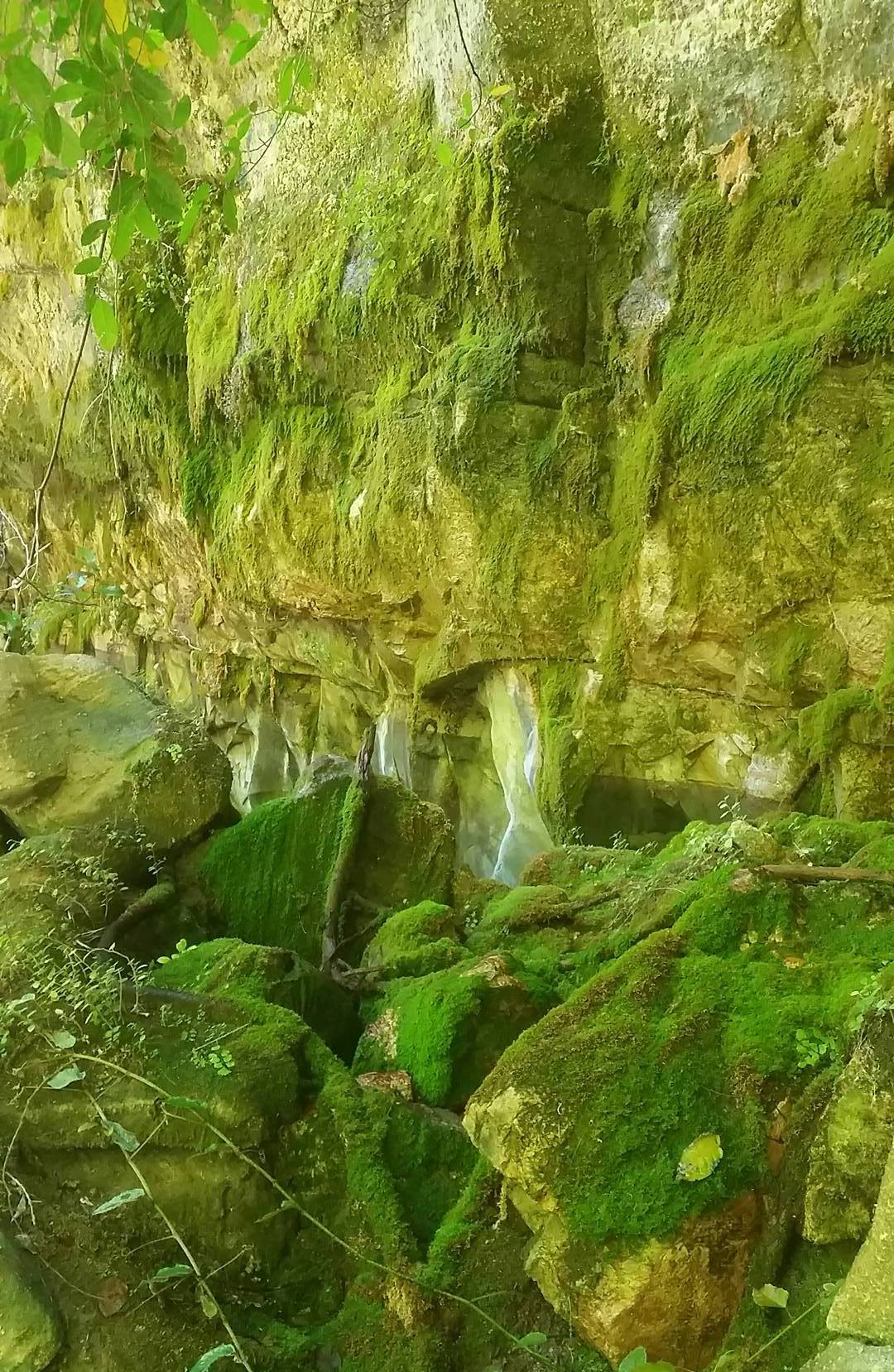 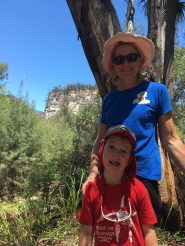 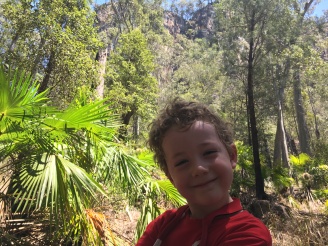 Well, we are so very proud of Mitchell.    He was amazing!!!!    He was a little trooper in walking 7 kms all by himself!!!    Andrew didn’t have to pick him up and carry him at all, not once.   We did have to bribe him with some lollies to keep pushing on and he did!!!!

After returning to the car after about 4 hours of walking, we scoffed down some Berri fruit ice blocks, they went down a treat after such an incredible hiking day!!!

We thoroughly enjoyed the day so glad we stayed on to do a hike in the Gorge!!!!   Yes, it was tough but exhilarating to make it there and back!!!

Such a shame we couldn’t get the drone up though, we would have got some spectacular shots from up high!!!   But being a National Park, you are not allowed to use a drone!!!!

We drove back to Takarakka and then went down to the beach for a cool off swim!!

On Saturday morning we packed up and headed north to Emerald.    The scenery was stunning all around us, even the cows!!!!   We had to stop a few times and wait for them to get across the road!!