And back to the Beach!!!!     Eighty Mile Beach is situated almost half way between Port Hedland and Broome.   From the Highway its about a 10 km drive on an unsealed red dirt road to Eighty Mile Beach Caravan Park.    The caravan park is located on the beachfront, behind the sand dunes  –  just lovely!!!!!

The beach was beautiful.   It is the longest uninterrupted beach in Western Australia and the distance is actually 140 miles (220 kms).     We had a drive along  the beach and then we parked up and Andrew tried his luck at fishing.    The weather was warm and sunny and it was a great afternoon to relax on the beach, fish and have a wine or two but we wouldn’t go in swimming – oh no no didn’t want to take the risk actually!!!!!

We had 2 nights here at Eighty Mile.   We packed up on Monday morning to continue driving further north on the Great Northern Highway to Broome.     It was school holidays now so everything was booked out.   We wanted to stay at Cable Beach Caravan Park and it was all full with a waiting list but we did manage to get a site at Broome Vacation Village.

Broome is situated at the southernmost tip of the Kimberley Region.      Broome has a multicultural population made up of many people who came here in the hope of making their fortunes from the pearling industry.   Broome’s Cable Beach is one of the most famous beaches in the world and stretches for 22km with white sands and turquoise water of the Indian Ocean.   Cable Beach is named after the communications cable which linked Broome with Indonesia (Java in 1889).  It is safe for swimming for most of the tourist season (Apr-Oct), Broome is a bustling town of tourists and holiday makers then.  It is a very attractive holiday spot for people in search of warm weather and sunshine!!!

One afternoon Mitchell and I took a Camel Ride along Cable Beach (a 30 mins pre sunset tour).  We went with Broome Camel Safaris (recommended by another travelling family) and our camel was called Kadesh.  Thoroughly enjoyed this, it was lots of fun!!!!

By the time we had finished our camel safari ride, Cable Beach was getting busy with cars.   People were driving in and setting up to watch the sunset.   Sunsets were amazing in WA!!!!!

The following evening we drove into town to Sun Picture Gardens.    It is the oldest open air cinema in the world.   We had never been to one before so we decided to go and watch a movie – The Incredibles 2, it was really cool sitting in old fashioned beach deck chairs and what was also interesting is that the building is under the flight path to the runway at Broome Airport so whilst we were watching the movie you could hear the engines roar and flashing lights of planes landing. 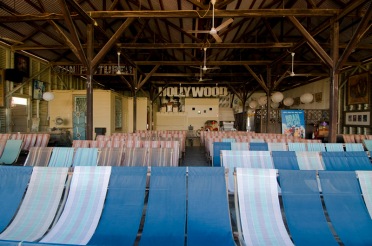 Unfortunately we also missed out on seeing ‘Staircase to the Moon’.   This is created by the full moon reflecting at extremely low tide to create a beautiful optical illusion of stairs reaching to the moon.     There are many places to see this but we were not at those locations on the right dates or at the right times.

From Broome we decided to drive up to Cape Leveque.   We put the question out to some FB travel pages and asked if we should take the van up there and what the road was like.    Alot of people came back saying much of the dirt road was pretty bad and advised not to take the van so we decided to store it at the caravan park.   As it was the tourist season and then you had school holidays as well, Cape Leveque was another busy area but we managed to get 2 nights in a self contained cabin at Lombadina (which is actually located on Thomas Bay, Dampier Peninsula).  Our cabin was very basic and clean but it was more about the experience of being in an Aboriginal community.

Heading up to Cape Leveque from Broome we travelled about 20 or so km on a sealed road and then it changes to around 90 km of corrugated unsealed red dirt road before the sealed road returns for about 100 km.     The road was pretty rough in some parts and other parts had been graded but on the whole the road wasn’t as bad as it was made out to be and since our caravan was an off road one, we could have taken it up  there. It took us a couple of hours to drive up there.    When we arrived at Lombadina we noticed a couple of caravans there had set up.  Oh well, we weren’t to know!

Cape Leveque Road is about 200 or so  kms  in total.   I have read that the 90km unsealed section will be bitumenised in stages with work expected to take a number of years.    If that road is completely sealed all the way as planned Cape Leveque/Dampier Peninsula will certainly see an influx of caravanners to the whole area!!!

Lombadina is a working community run by Aboriginal people and has a population of about 70.   There is an office, artifacts and craft shop, workshop, bakery and fuel pump.    There is an old Church which was built in 1934 and is heritage listed and is an important part of their community and is still used today for mass services and weddings.     We had a great couple of days here.    There are a range of guided tours available.    We enjoyed a Mud Crabbing Tour with a local Aboriginal guide (Bud) who taught us how to catch mud crabs in the mangroves.     Andrew and Mitch each caught a mud crab!!   When we got back to camp Bud cooked them up over hot coals!   Delicious!!

The Lombadina bakery has been in operation for over 25 years and is renowned for baking the best bread on the Peninsula.    We bought a loaf of fresh bread  which is made from their wood-fired oven – yummy!!!!! 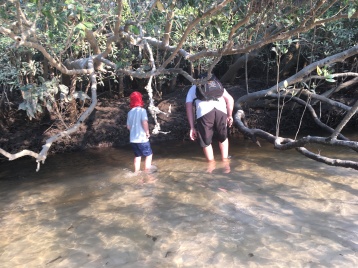 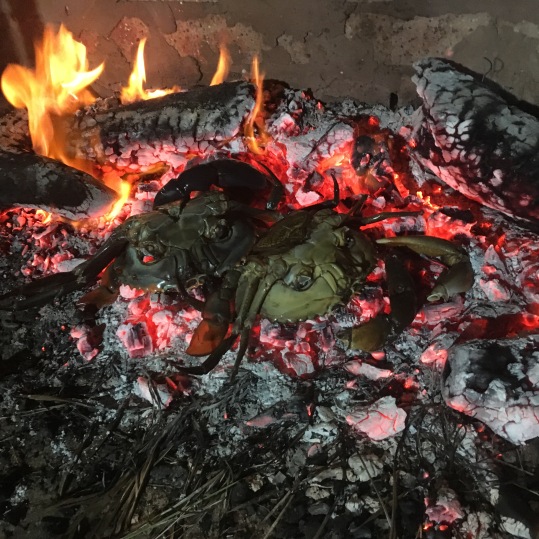 Andrew also had a fantastic day out on a Fishing Charter where he had success in catching many fish!!!!  You Beauty, finally caught some big stuff!!! 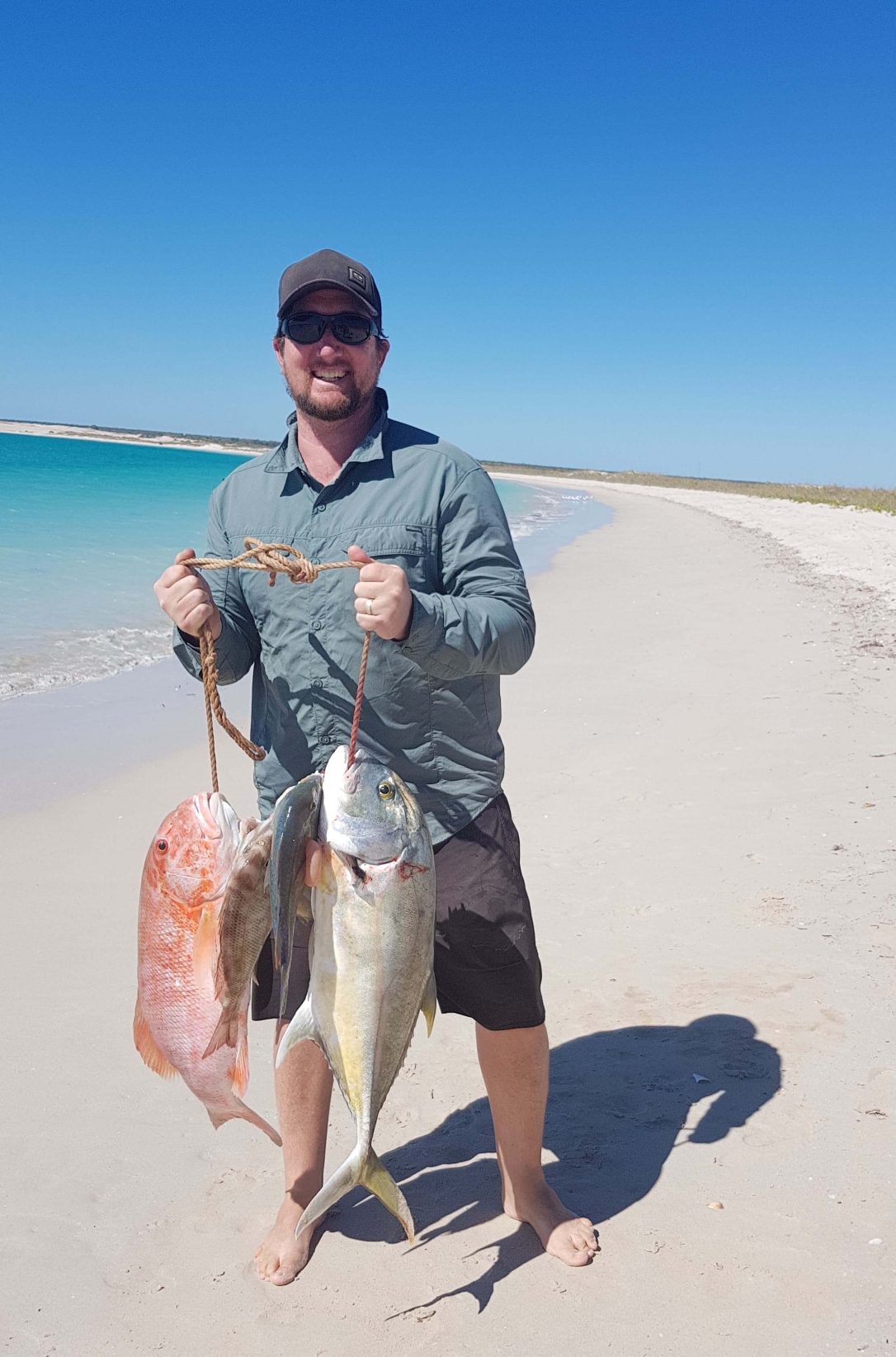 The coastline up here is stunning!   Who needs to go to the islands overseas when you have this in Australia!!!!  Unspoilt paradise!!!

We also took a drive further up to Kooljaman at Cape Leveque.   Off the main road, the dirt road in was pretty bad actually and is only for 4WDs.     We had a wander through their gift shop and they also had a restaurant and a cafe there.     A Walking Pass day entry was $5.00 per adult and a Vehicle Pass day entry was $25.00 so we left.    From there we drove over to One Arm Point where there was another Aboriginal community – Ardyaloon.   We had a drive through town and along the coastline and then headed back to Lombadina.

We left on Saturday afternoon and drove back to Broome for the night.  We packed up early on Sunday morning and then headed east towards Derby on the Great Northern Highway.   We stopped in at Derby to do some shopping, fuel and visit the info centre.   From Derby we continued on stopping to have a look at a huge boab tree and from there we drove on to Lennard River Rest Area for a free overnight camp. 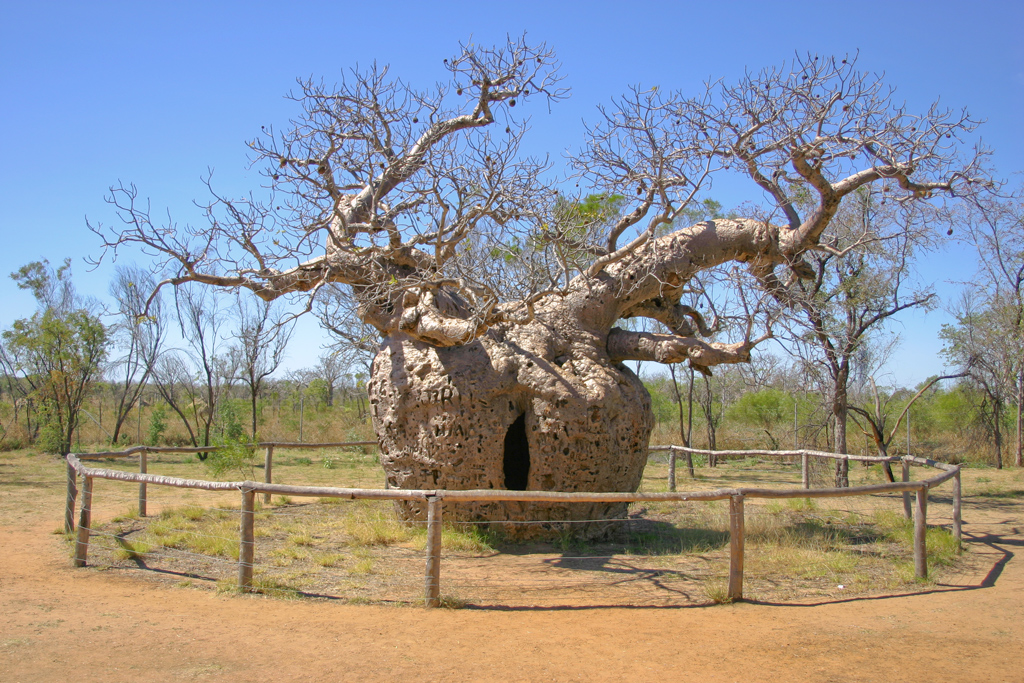 Looking back now, the one tour I wish we had done was the Horizontal Falls Seaplane Adventure Tour which can be organised out of Broome or Derby.  It is expensive but it would an awesome once in a lifetime experience.     One day perhaps, we may get back to do this???