A White Christmas in Europe!!!  Now this is something that we have never done before! Were we ready for the Snow and Minus something temperatures??  We didn’t know what to expect and I have to admit that I don’t really like the cold weather (hence why I love living here in Queensland) but this was a once in a lifetime opportunity that we just had to experience and with Mitchell being the age of 7 it was the perfect time to go (and meet ‘Santa Claus’).  We were most excited for our next travelling adventure!!   Woo Hoo!!

On the Friday, the temperature in Brisbane had been a hot 30ºC!! (Well, we can say goodbye to those temps for the next few weeks LOL!!!).   We travelled with Cathay Pacific Airlines and we flew out on Saturday morning 21st December at 12.40 am landing in Hong Kong (around 8 hrs 30 mins flight time) the following morning for a 3 hour stopover.    Another first time experience for us was that we were very fortunate to travel Business Class (on most of our flights).   Ooh la la, well isn’t this just the next level in flying.    I’m not sure if we can go back to flying in Economy LOL LOL.   Wow, it made such a difference to be able to lie down and sleep through.

We changed planes to Finnair.    Finnair had a more modern feel than Cathay Pacific but the seat area was smaller.   It was just under 11 hours flying time from Hong Kong to Helsinki (the capital of Finland).    It was awesome having your own private area with a TV screen and plenty of food and drinks.  The service was wonderful with both airlines.  With travelling business class, we also had access to the Cathay Pacific, Qantas and Finnair Lounges at the airports.  Oh, and I loved the cute little goodies bag they give you!! 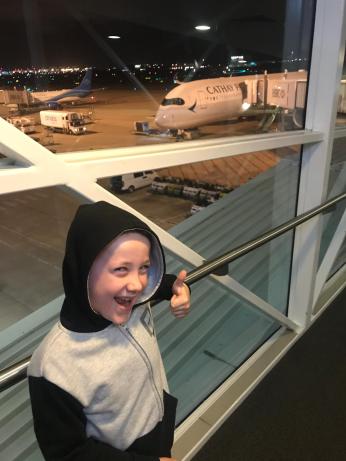 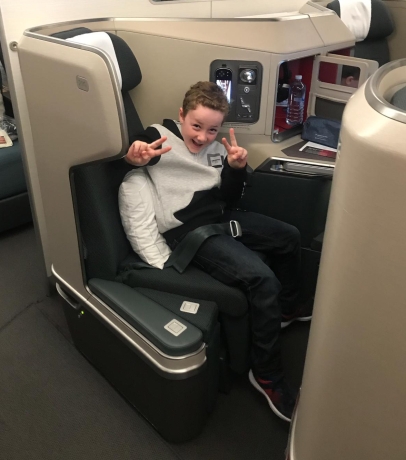 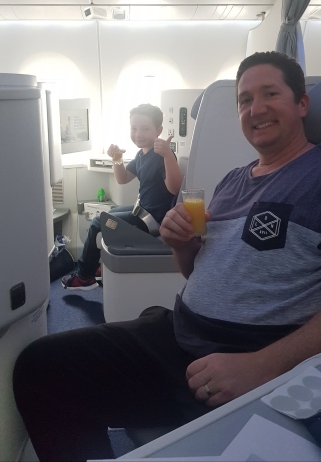 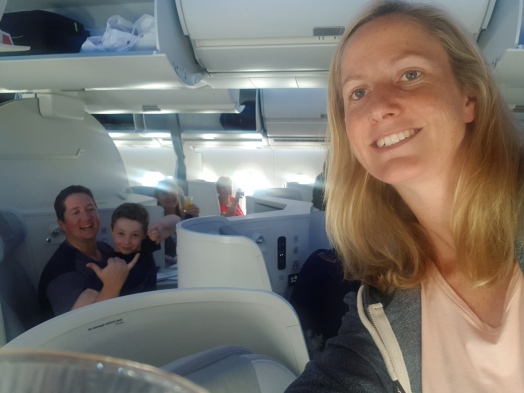 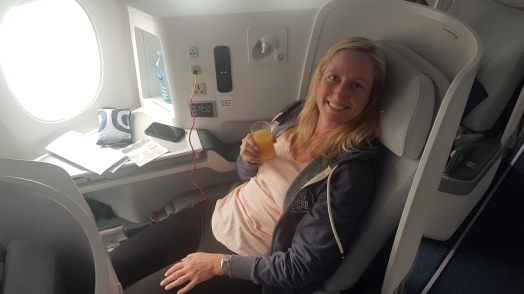 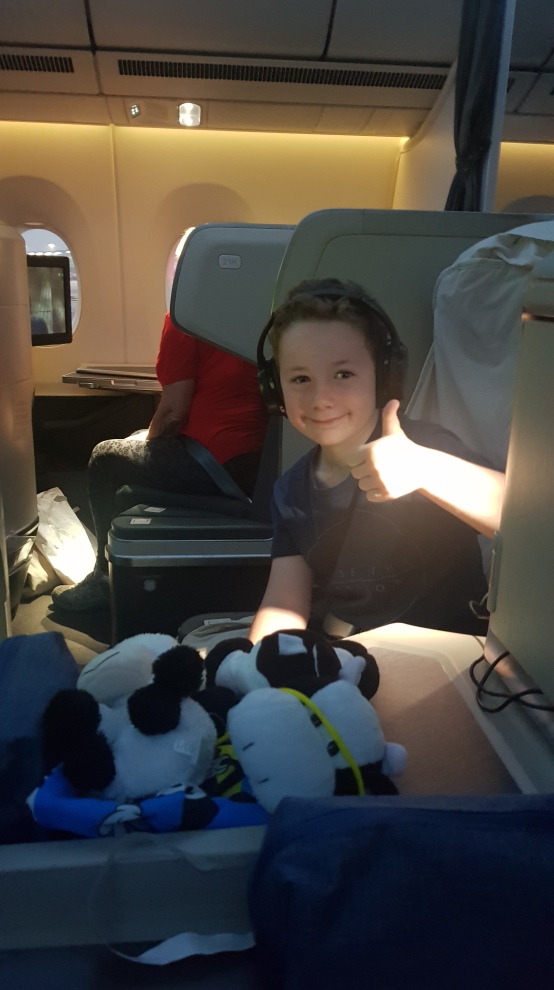 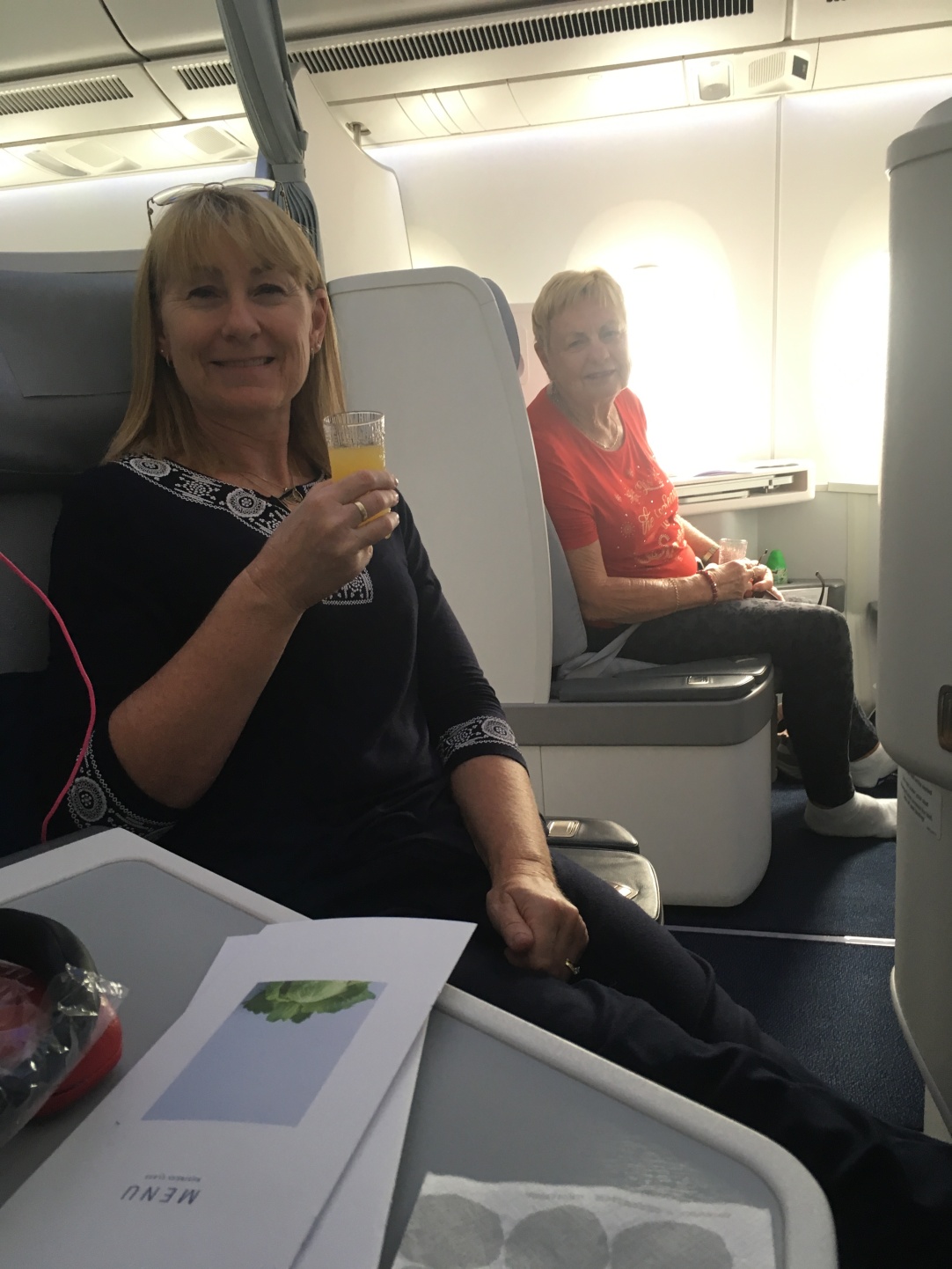 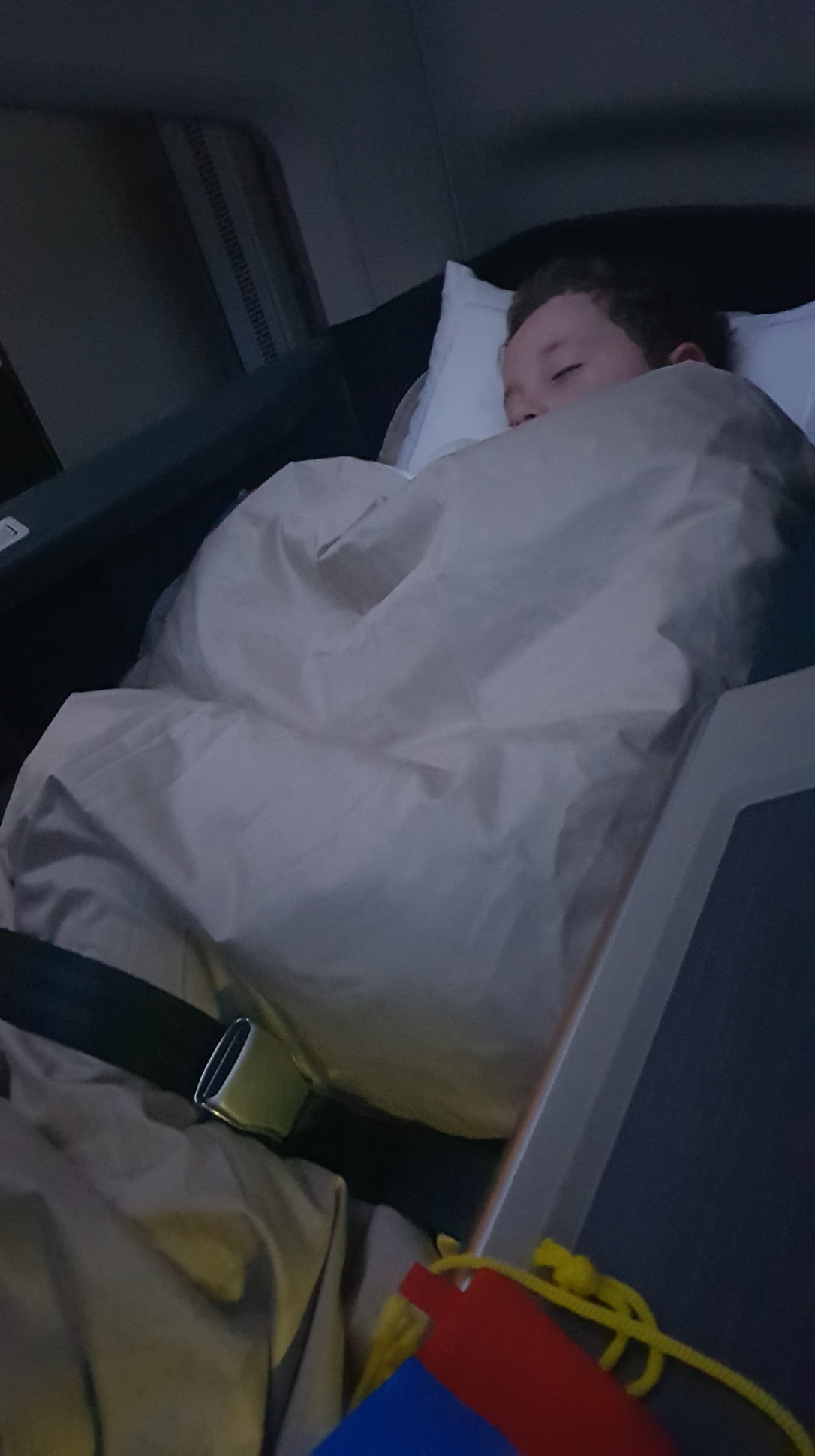 Mitchell all snuggled in his bed sleeping

We arrived late Saturday afternoon where we had an overnight stay at Hilton Helsinki Airport Hotel.   How cool is this – we were able to take a trolley with all our bags through the airport and straight out to the Hotel and then up into our room!!     Even though it was the afternoon, it was now getting dark as the sun sets around 3.15 pm (sunrise is around 9.00 – 9.30 am in December).

The next morning we had a lovely buffet breakfast and then stepped outside to an overcast and wet day.   We caught the bus into the city (approx 25 minutes).    We had a walk through the city and around the Christmas markets.   We also tried some mulled wine which is called Glögi in Finnish.   It is a traditional Scandinavian hot drink during winter, especially around Christmas.

Glögi recipes vary widely; variations commonly start with white or sweet wine or spirits such as brandy or cognac. The production of glögi begins by boiling water and adding spices to it.   After a few minutes of simmering, the mixture is sieved and fruit juice, wine or clear spirits are added.    The most common spices in glögi are cloves, cinnamon, cardamon and ginger.   Other common ingredients can include citrus peel from oranges or lemons, raisins or almonds.   I do love my wine but I have to say I didn’t like this, I think it was the spices.

Even though the temperature was around 3ºC, we were all dressed warmly so we didn’t feel cold walking around outside.    I just loved how the streets were lit up with fairy lights and there were Christmas trees with lights all around the city.    Alot of the shops also had Christmas lights and decorations.    Wow, it was just beautiful!!! 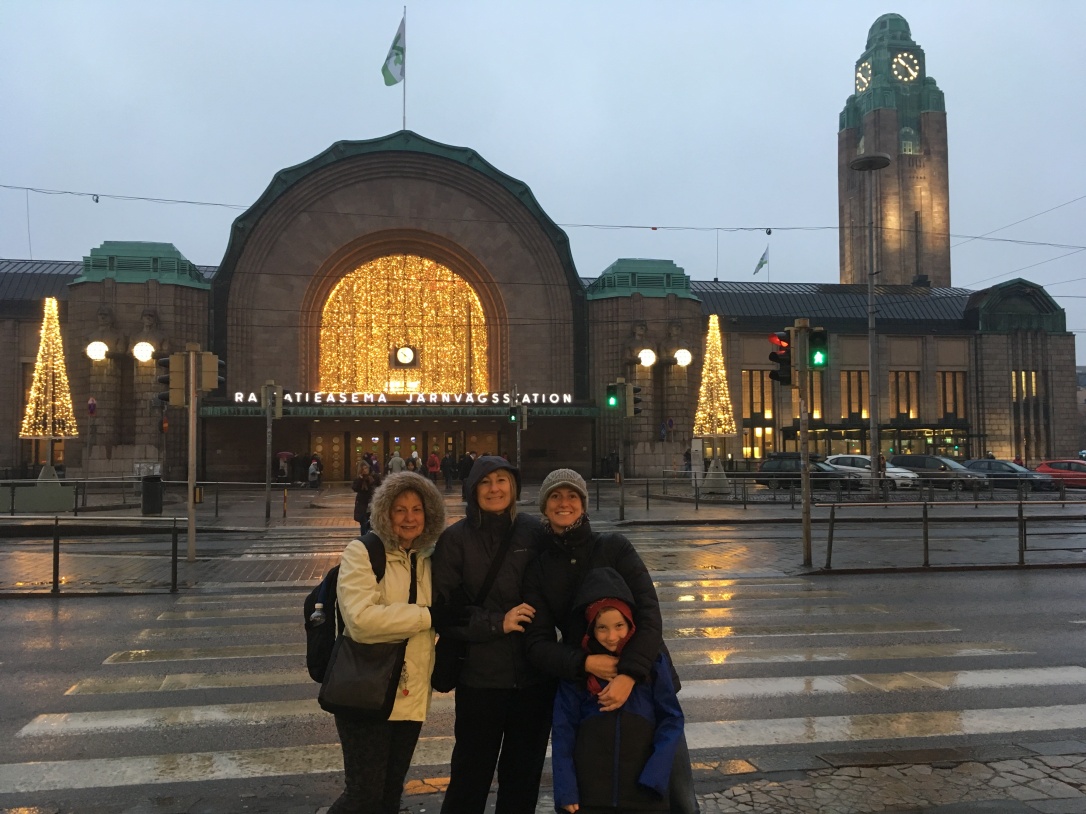 My mum and I, Leanne (Andrew’s sister) and Mitchell in front of the main Railway Station 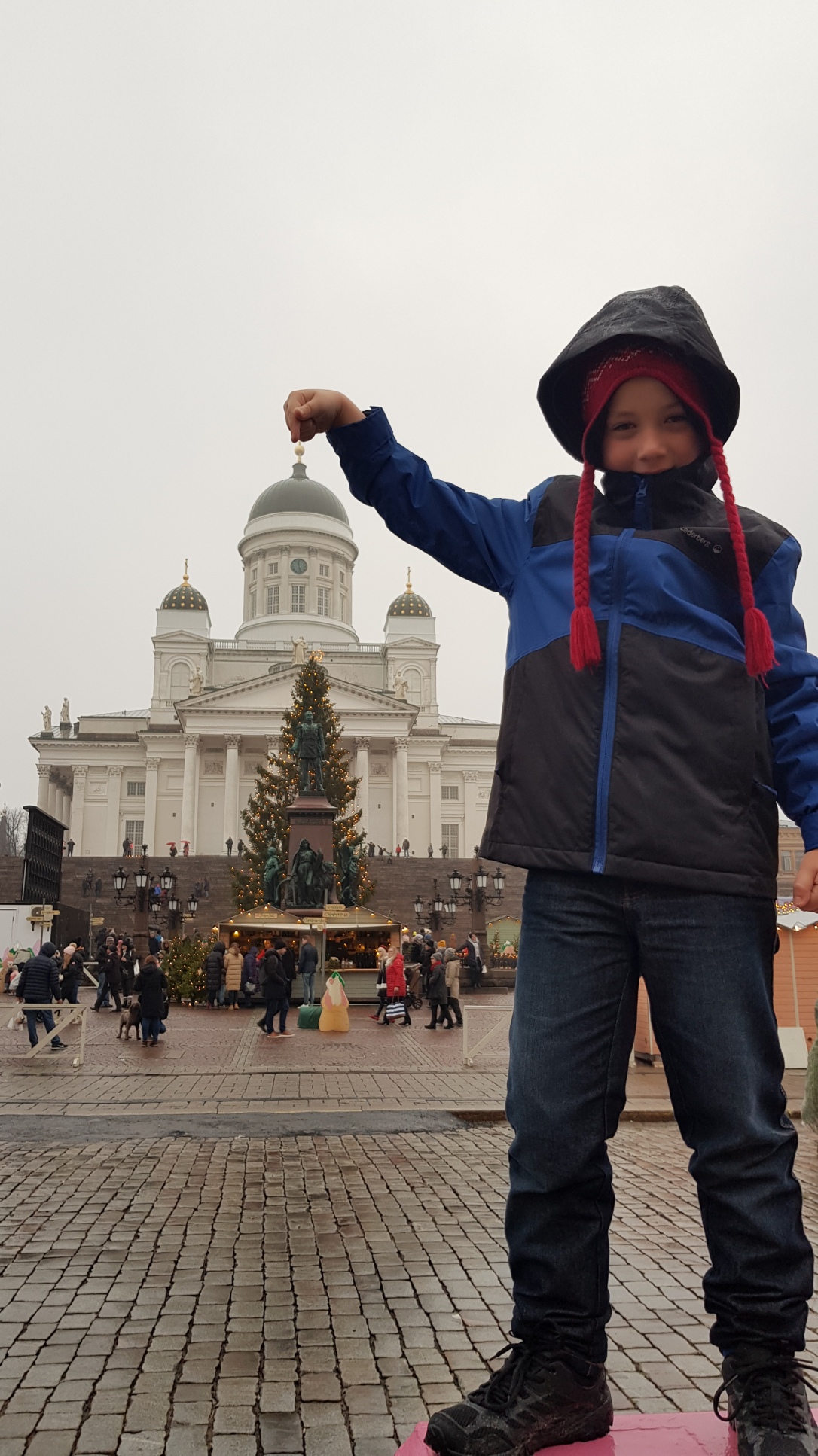 We walked up the steps to the Helsinki Cathedral.   It is the Finnish Evangelical Lutheran Church and is in the centre of Helsinki.  The church was originally built from  1830 – 1852 as a tribute to the Grand Duke of Finland, Tsar Nicholas I of Russia.   It was also known as St. Nicholas Church until the independence of Finland in 1917.

The Helsinki Christmas Markets is the heart of the Christmas experience in Helsinki.  It is located in Senate Square and is one of the oldest and most popular Christmas markets in Helsinki.    There are many vendors there selling Christmas prepared foods and fresh produce, handicrafts and design items, Christmas gifts, clothes, Christmas ornaments and candles, etc.  The markets run from 6th – 22nd December so we were very lucky to be there on the last day of the Markets!! 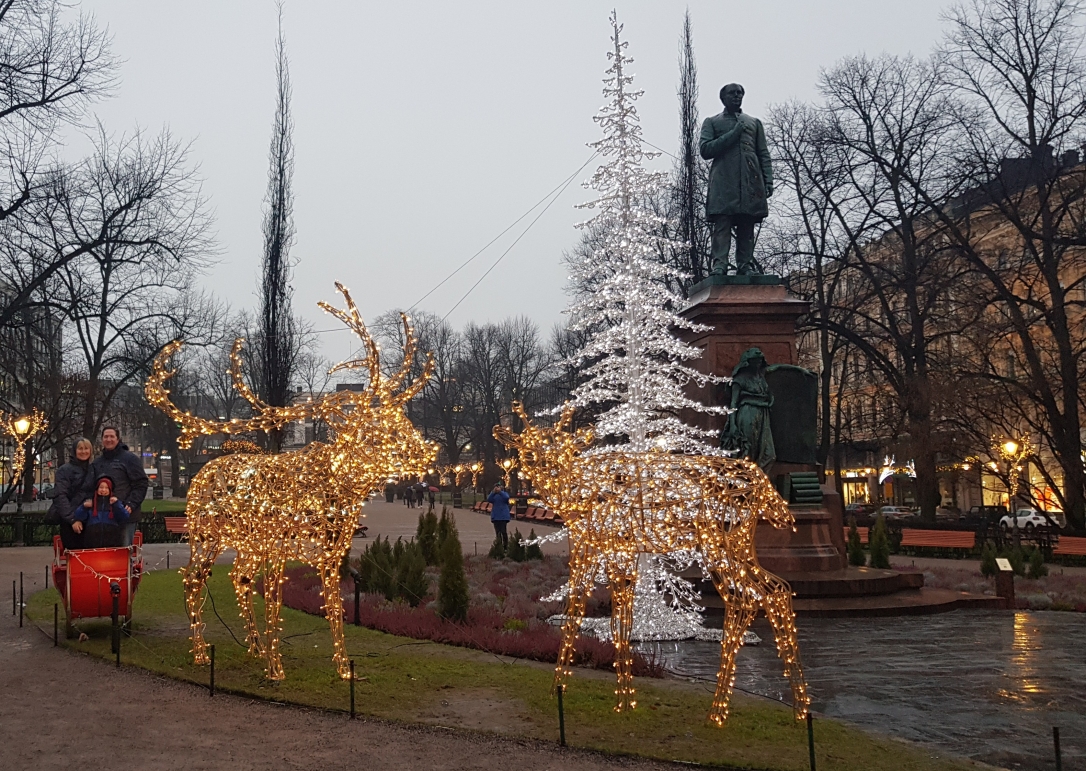 Andrew and Leanne “just singing in the rain”

After having lunch and looking at more shops, we then caught the bus back to the Hotel.   We packed up and checked out of the hotel and walked to the airport to get ready for our  Finnair flight to Kittila, Lapland.