Our next stop after Myocum was at a place called Woolgoolga where we met up with Andrew’s Dad (John) and his wife Janis who also had their caravan.   We stayed at Woolgoolga Lakeside Caravan Park for 5 days.  John and Janis stay at this caravan park annually.    John’s mother actually grew up in Woolgoolga so there is some family history here as well.

There were alot of Victorians up here obviously getting away from the cold for awhile!!   We saw alot of “grey nomads” sitting outside of their caravans having drinks and nibblies (must have been ‘happy hour’!!!).  And they all check out your car and your caravan as you drive past!!!!   After parking, we then find out that the tree the caravan is sitting under had a python in it a few days earlier which the owners of the park had removed!!!!  Yikes!!!  Hope it doesn’t try to come back whilst we are here!!!!!

Woolgoolga is a quiet and small town which is about 1/2 hour drive north of Coffs Harbour NSW.   The caravan park is situated between the Woolgoolga beach and lake. The area offers great outdoor nature activities where you can surf, fish, snorkel and dive.    On the headland you can watch whales and dolphins migrating north from July.    The town also has a large Indian Sikh community and has an annual Curry Festival which is usually held in September.   There is also a shipwreck on Woolgoolga Beach known as the “Buster” shipwreck.   The ship was built in Nova Scotia, Canada.  It had come up from Sydney to load timber bound for New Zealand.   The ship was driven ashore by a storm and became a total shipwreck on 8 March 1893.

We did some lovely walks around town and to the beach and the lake.   John, Andrew and Mitchell enjoyed trying to catch yabbies.   John had a special yabby pump!!!   This was the first time for Andrew and Mitchell.    They also went out fishing a few times – no luck in bringing back any fish though. 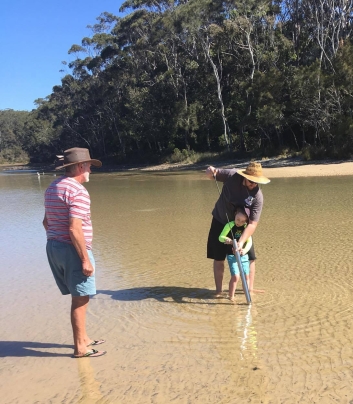 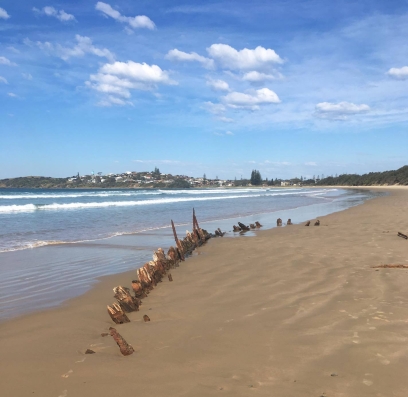 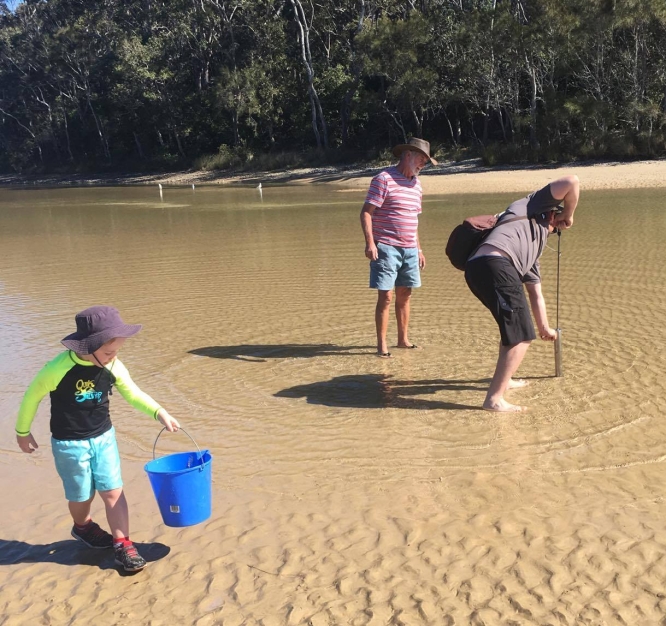 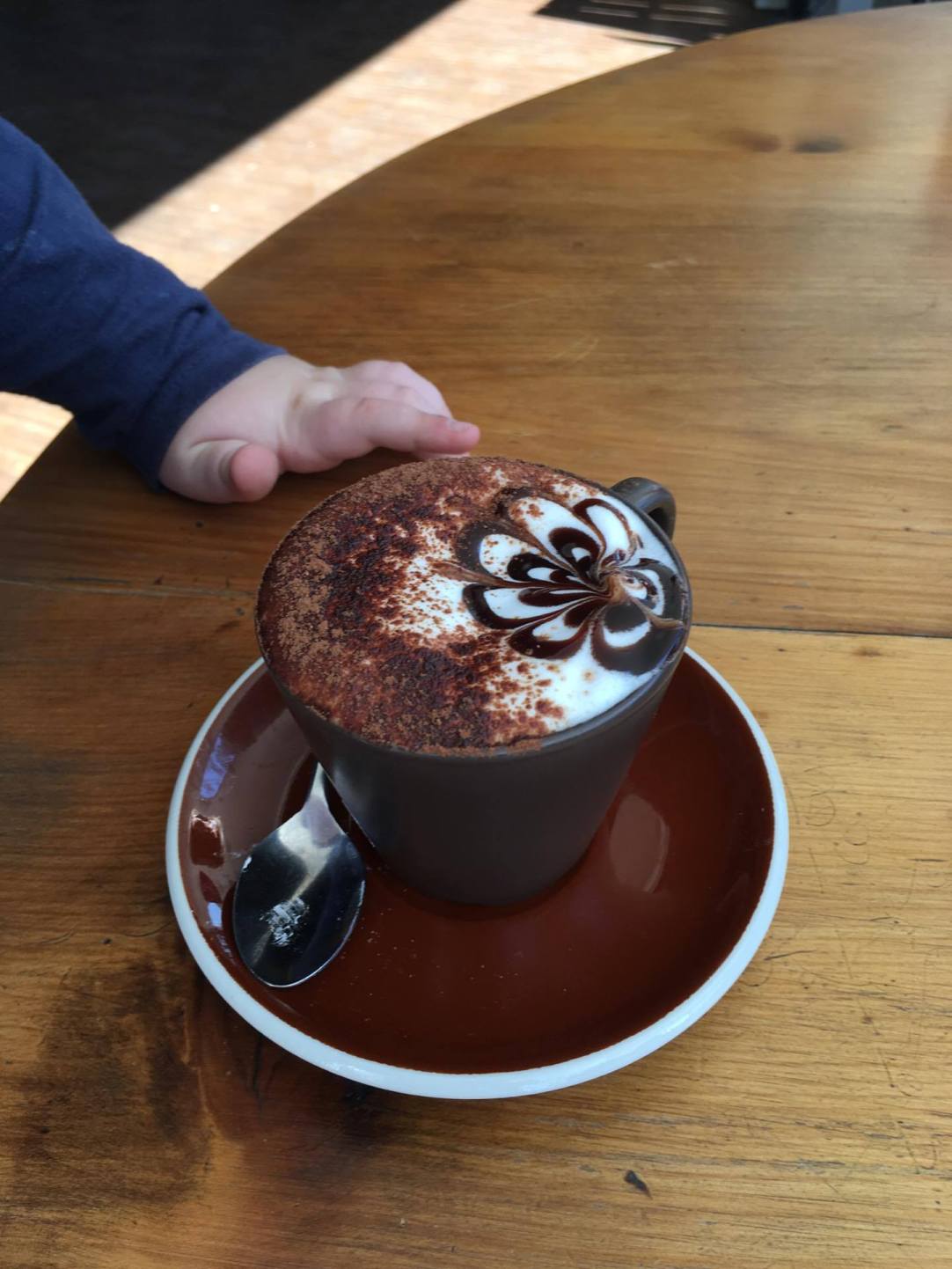 We enjoyed coffee out a couple of mornings and had dinner at the local bowling club one night.  We also attempted our first roast lamb dinner on the Weber Q – a success!!  Absolutely beautiful!!!    So in all it was a nice relaxing few days where we also enjoyed “happy hour” ourselves every day!!!!

John and Janis have had a caravan for many years so again it was a good ‘practice run’ for us before we take off on our own!!   Andrew received alot of advice and help from John.  With John here to assist, Andrew took the opportunity to set up the full Annex to the van which all went well!!!  Now I need to learn all this too so I can help!! 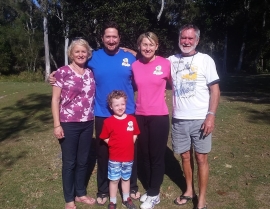 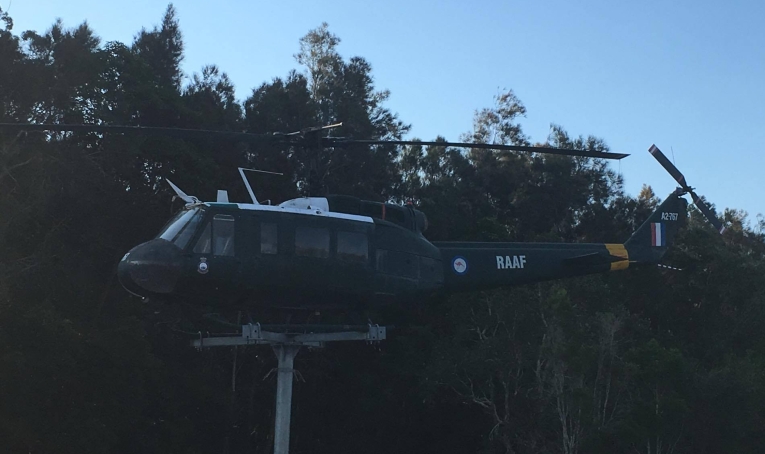 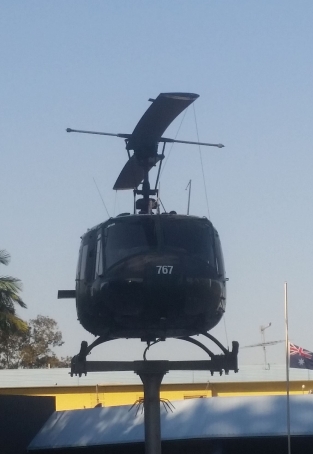 We also spent a day at Coffs Harbour where we went to the Big Banana Fun Park.  Had a great family day out there!!    There’s quite a lot to do there such as ice skating, laser tag, tobogganing, giant 6 lane slide racing, water park and slides along with a cheesemaking shop,  candy making shop, opal shop, cafe, gift shop and plantation tours. They have combo deals and the more activities you do, the more of a discount you receive.  The water park was closed for winter but it looks like it will be alot of fun in Summer!!

After the Big Banana we drove to Korora where we went to the Carobana Confectionary Factory.   It is a family owned confectionary factory and also has a retail shop.    Entry is free and you can see the production in the mornings of their carob coated products, honeycomb, rocky road and nut brittles.   Since we were there late afternoon we could only watch this process recorded on TV and have a look at the production area through glass windows.    There were plenty of free product samples!! YUM!! YUM!!  If you love Carob and in particular honeycomb and rocky road, this is the place for you!!!! 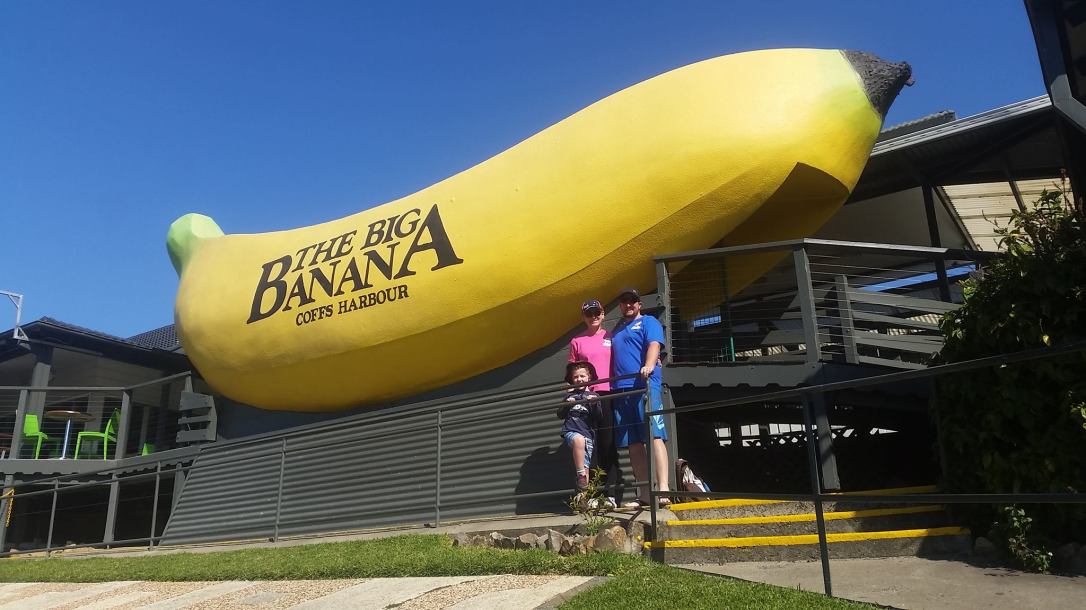