Alice Springs  —  a modern outback town surrounded by these incredible mountain ranges and so rich in history.    Again, another area we could have stayed alot longer to explore.      We checked into the Big 4 MacDonnell Range Holiday Park for 5 nights.

We were only a couple of sites away from Matt and Ally so that was good.    We also discovered that Dion and Hayley Glover (Glovers Gap Year) who we met in Tasmania were in Alice Springs as well.   Matt and Ally had also met them on their travels.

On Thursday we all met up at the Telegraph Station for a picnic.    The Alice Springs Telegraph Station Historical Reserve marks the original site of the first European settlement in Alice Springs.    Established in 1872 to relay messages between Darwin and Adelaide, it is the best preserved of the 12 stations along the Overland Telegraph Line.

At the Station, it is also gateway to the Alice Springs Mountain Bike Trail Network and Parks walks and it is the starting point for the Larapinta Trail (which is a 223 km bushwalking/hiking trek through central Australia).   The guys went for a bike ride whilst the kids (all 6 boys!!!!!) played in the park!!!    Later that afternoon we met back at the caravan park for drinks. 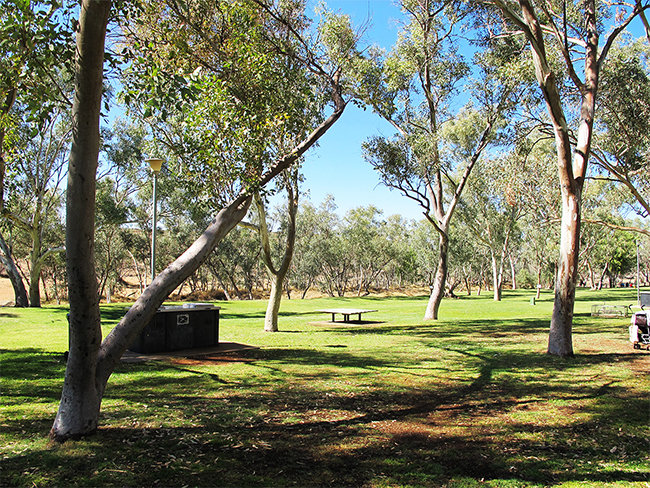 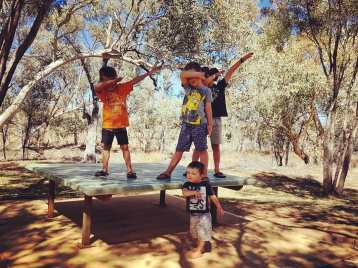 On Friday we drove out to the Tjoritja/MacDonnell Range National Park which stretches for 161 km west of Alice Springs.    There are beautiful scenic gorges, swimming holes, some camping facilities, walking and bike riding trails.    We stopped at Simpsons Gap which is one of the most prominent gaps in the West MacDonnell Ranges.  It is  renowned as a place to see the black footed rock wallaby (which we did!!!).     This area is also an important spiritual site to the Arrente/Aranda Aboriginal people.

From here we drove on to Standley Chasm.   It is now 100% Aboriginal owned & operated and there was a charge of $30.00 for the three of us to access this private property.      As it was getting late in the afternoon, we decided to just head back to the caravan.

On Saturday was the Henley on Todd Regatta – the only dry bed boat race in the World!!!    This is another big event held in Alice Springs every year as part of the Alice Desert Festival!!

Reg Smith was the creator of the Henley-On-Todd, a unique, mad-cap event, which had its inaugural regatta in December 1962.     Earlier that year members of the Rotary Club of Alice Springs met for a picnic at 16 Mile Creek, where over a few beers they discussed ways to raise money for charity. Reg came up with the idea of holding a waterless ‘Regatta’ on the dry bed of the Todd River.

“Okay, what about the boats – do we tow them or push them?”
“Neither,” said Reg. “We cut the bottoms out and carry them!”

And a tradition was born.

The morning started with a big street parade through Todd Mall and then after that the races started.     The town was very busy, it’s a popular event!!!   There were also lots of stalls, activities and races for the kids too.

That night we had another get together with dinner and drinks at our caravan.  With the Walkers and the Glovers there, Ally suggested having an early 6th birthday celebration for Mitchell.

On Sunday we had another walk through Todd Mall and around town.     We drove up to Anzac Hill just before Sunset.    The Anzac Hill Memorial was unveiled on 25 April 1934  and was originally dedicated to all those members of the armed services who had paid the supreme sacrifice during World War I.     It has now become a beautiful memorial to all those who have served in the defence of their country during all wars in which Australia has participated.  From here we had superb views of Alice Springs town and the surrounding ranges.

I really enjoyed Alice Springs    Its another town with so much to see and do.   I love the relaxed feel of outback towns.     We barely saw the West MacDonnell Ranges let alone the East MacDonnell Ranges!!!  I also missed out on seeing the Alice Springs School of the Air, that would have been interesting to see how schooling is made possible for children living in remote Central Australia.    The caravan park we stayed at was great for the kids with heated swimming pools and waterslide, adventure playgrounds, jumping pillow, TV and games room, go kart and bike hire, basketball court and BMX track.    We loved the Sunday morning Pancake Breakfast too!!!

On Monday morning we said our goodbyes to the Walkers who were making their way home to SA.   Like us, the Glovers were also heading to Kings Canyon.    We packed up and travelled south on the Stuart Highway and met them at Erldunda Roadhouse.  We turned off onto the Lassiter Highway and then up to Luritja Road before stopping at a free camp overnight!!     We weren’t far off the main road but it felt like we were in the middle of nowhere, we had the place to ourselves!!  Andrew put his drone up whilst the boys explored the area.  Pizzas for dinner with sparklers & marshmallows by the fire afterwards.

On Tuesday morning we packed up and drove to Kings Creek Station which was about a 5 hour drive.